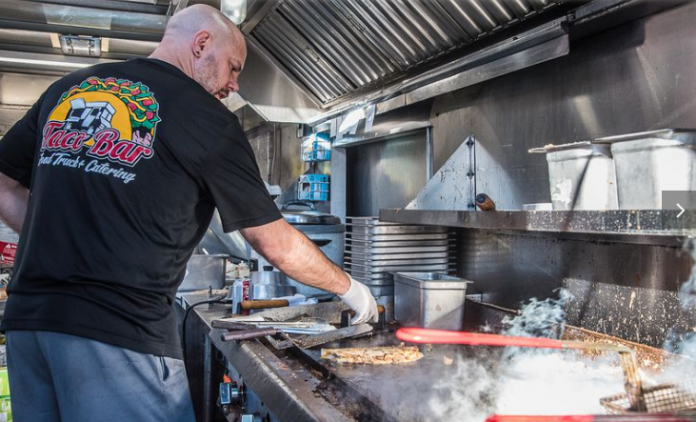 It’s all about variety, according to Ken Conary, of Elkridge, who along with his family, left the Elkridge Volunteer Fire Department on a recent Friday night with tacos, waffles and pulled pork.

“We come about once or twice a month,” Conary said. “They’ve got an amazing variety of food trucks.”

This is the second year the fire department has hosted Food Truck Fridays and the station has plans to do it again next year.

“It is a good opportunity for us and the Elkridge community,” said Lt. Keith Mariner. “It is a great start of the weekend.”

Since April, Food Truck Friday has featured an average of 13 food trucks a week, offering everything from pasta to gyros to gelato, pizza and more. The season will conclude in November and start back up again in March 2020.

“We have a core group of trucks that come and others that rotate,” Mariner said. “They [the food trucks] manage that. It is a super relationship.”

Thierry Rebouffet, of T&J Waffles, organizes the food truck rotation for the station. Trucks pay a fee to get a spot and agree not to sell beverages, which are sold by the fire department.

“All the money we collect goes to the fire department to help pay for this new fire station,” Rebouffet said. “We support our fire department. I believe in giving.”

“We get money from the trucks and profits from all the drink sales,” Mariner said. “We find it very beneficial. All of the money raised goes toward the mortgage.”

Hundreds of people attend, Mariner said, with a “strong core” of regulars. 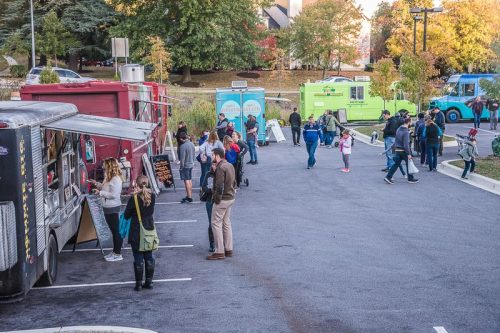 “We joined this rotation late last fall,” said Rudy Adriano, owner and operator of Jenos Steaks Restaurant & Food Truck. “It’s a blessed opportunity. All of the trucks here do something special.”

Based in Severna Park, where Adriano has had a brick and mortar Jenos Steaks storefront for 28 years, Adriano entered the food truck business in 2012.

Adriano ‘s truck can also be found on Tuesday nights at West Friendship Volunteer Fire Department’s Food Truck event. This is the first year the station has hosted a food truck night, and it has every intention of hosting it again next year, organizers say.

“As of right now, we are planning on having it again next year, starting in I believe April,” Theresa Collins, West Friendship Volunteer Fire Department’s contact for the food truck event, wrote in an email.

“It is a fundraiser, but more than that is it gives a place for the community to come and enjoy time with family, friends, and neighbors,” Collins added.

Organized by H2 Markets, West Friendship’s Food Truck Tuesdays have had a great response, according to Chad Houck, owner of H2 Markets.

“They are wonderful to work with. They’re a great group of volunteers,” Houck said. “You see so much of the public come out.”

Houck’s company handles the selection of food trucks and the collection of money. It also provides picnic tables, takes care of trash and provides entertainment.

“The challenge for us at West Friendship is the parking,” Houck said. “We have to park efficiently. They [the department] have that auxiliary parking lot across the street. They do a good job keeping the public safe by lighting up the parking lot and the crossing.”

Despite its tight space, Houck makes sure the station always has a good mix of food trucks.

“The food truck genre has grown. They are like full gourmet restaurants on wheels,” Houck said. “We bring so much great food every week. We’ve got everything from Greek to Italian to Creole, brick-oven pizza, cheese steaks, wings. It’s pretty unbelievable the food they’re able to bring.”

Elkridge also has “a nice, nice mix” of different foods as well as plenty of parking and a new station, Mariner said.

“Our brand new gorgeous station, people enjoy seeing that,” Mariner said. “People can go in the hall and enjoy the air condition. It’s a nice event.”

West Friendship’s season was to end on Oct. 22 with a Truck or Treat event, but rain moved the closing day to Oct. 29. Youth are encouraged to wear costumes and the food trucks will provide candy.

“Families come out and a lot put their cellphones down and sit with neighbors,” Houck said. “The lost art of conversation tends to happen. So many people used to drive by the building. Now, they are interacting with the fire department.”

West Friendship Volunteer Fire Department’s last Food Truck night of the season will be Tuesday, Oct. 29, from 4 to 8 p.m. at the station, 12535 Old Frederick Road, Sykesville. Kids are encouraged to wear costumes for Trunk-or-treat. Call 410-353-2861.