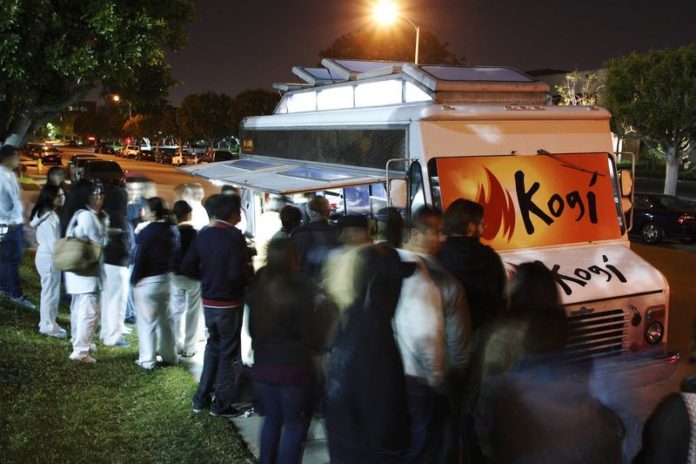 In a city where restaurants often come with their own valet parking and an obligation to tip, LA’s foodie scene is being transformed into an earthier, more accessible experience by the rapid rise of the ‘food truck’.

So many trucks – think fast-food vans with a gourmet twist – have now sprung up that one is usually within walking distance of the city’s coolest spots, West Hollywood’s tourism man Andy Keown tells us. A wagon selling Korean/Mexican tacos (known as Kogi) was the innovator in late 2009, inspiring a deluge of others to follow. The campervan-sized vehicles, with names such as Baby’s Badass Burgers, The ButterMilk Truck and CrepenAround, simply park up somewhere in the City of Angels, and then alert the hungry to their location on Twitter.

There’s a truck for every taste too – grilled cheese, chocolate and churros, shaved ice anyone? – but be warned, such is the hype surrounding the ‘gastrovans’, a queue of locals are sure to be lining up, keen to sample the next best foodie thing.

Where to begin? Well, www.findlafoodtrucks.com promises to collate details of the best vans – and their twitter posts – on one site. Our top tip is to avoid the calorific giants – Krispy Kreme doughnuts among them – who’ve recently hijacked the food truck movement with their own vans.

The curious upshot of this alternative take on dining is the rare sight (particularly for LA) of clusters of people hanging out on the sidewalk (er, pavement) eating and socialising.

Whatever next for the Californian city, one ponders. Public transport the people can actually use?

Do you have a favourite food truck in LA or elsewhere? Post here!