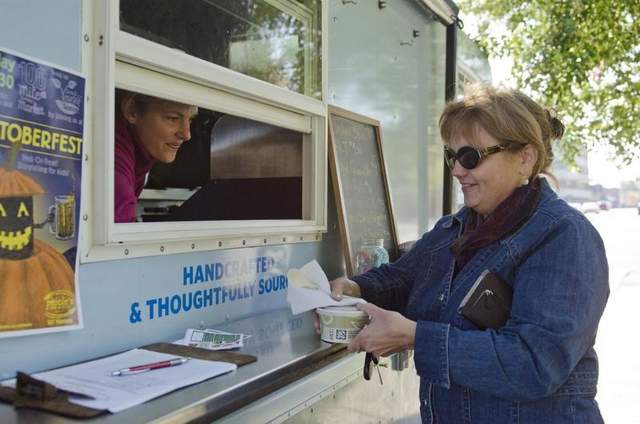 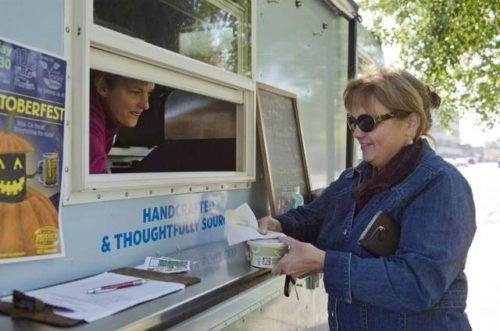 As downtown restaurant owners insist they will bring unfair competition while supporters say they’ll bring much-desired new cuisine options, one point may be met with little contention: Food trucks sure know how to start a debate.

“Those of that us are still downtown have survived the recession, four years of downtown infrastructure construction, and recent bridge construction and closures,” a group of brick-and-mortar business owners said in a letter to Battle Creek city commissioners last month. “We were told that the 30+ million dollar investment was and (sic) long-term strategy to attract other unique restaurants and businesses. We fail to see the need for infrastructure improvement for restaurants with wheels. Now, we face a proposed change to the ordinances to allow food trucks to undercut our business model. This change in the rules may just cut us off at the knees.”

Needless to say, talk of changing a decades-old ordinance this year to allow mobile meal providers in downtown Battle Creek has been met by resistance. The discussion has played out before and other municipalities have already grappled with the same arguments being made in Battle Creek. Across the United States, proposals to change food truck regulations have also seen staunch opposition, even legal action at times.

But officials who have tread the path to downtown food trucks say there are some steps they took that helped: public input and compromise.

“As a matter of fact, nobody was perfectly happy,” said Rob Bacigalupi, acting executive director of the downtown development authority in Traverse City, where recent city commission votes permitted food trucks to operate on public property. “And sometimes that’s the best thing, when nobody gets everything they want.”

“It was very well-received,” he said. “And it wasn’t created for the food trucks, per se. It was an idea to promote downtown, really, during the lunch hour more and to use Bronson Park. So that was the main emphasis for it, and secondarily, ‘Oh yes, we have food trucks there as well.”

Kalamazoo city commissioners unanimously approved an ordinance more than a year ago that would allow up to 10 mobile food vendors to operate each year. The annual, non-transferable $500 license required operators to abide by specific insurance guidelines and prohibited them from parking in designated areas overnight. They also couldn’t operate on state-maintained streets or within 150 feet of a restaurant during its business hours.

Bauckham said the city “wanted to do something to encourage food trucks but also to regulate them.” The most common concerns heard when officials met with both restaurant owners and food truck operators to introduce the proposal included those about distance, said Bauckham, and other minor issues such as signs and trash.

All were addressed in the city’s ordinance. Bauckham said five food truck licenses were issued by the city this year, which he said he thought was a good number because “when you start to get more, it may not work as well.”

The ordinance is new, he said, but “word is spreading.”

Traverse City also met with restaurant owners and food truck operators when it considered changing its mobile vendor ordinance to allow food truck operators to conduct business on city property. Before, food trucks were only allowed on private property and were were charged up to $100 per day to operate in some cases. Military veterans were exempt from fees.

In May, after a year of studying and debates, city commissioners OK’d food trucks on a trial basis. It required vendors to pay an annual fee of $1,225 to park on city property or $725 for private property and allowed food trucks to operate on certain streets and in some parks.

Bacigalupi said local restaurant owners were “very vocal,” especially over the difference in fees and property taxes paid by food truck operators. They argued the ordinance allowed for an unfair playing field, he said, providing competition just in the summer months and not year-round.

Ultimately, discussions with affected business owners held by a commission committee and the DDA board led to higher fees and parking restrictions, but no distance requirements from brick-and-mortar establishments.

“The important thing is just to go through the sometimes painful process of the public meetings and make sure everybody had a say in it,” Bacigalupi said, “and try to find the middle ground and try to figure out what those issues are.”

Traverse City commissioners are expected to revisit the ordinance after the season, he said.

A threat to restaurants?

It’s one of the most common arguments against food trucks: they have an unfair advantage when it comes to competing with restaurants.

“I think the argument that a way of doing business is a threat that has to be stopped, is manifested not in the food truck scene but every time there is a new disruptive industry that comes on the scene,” said Bert Gall, senior attorney at the Institute for Justice, a libertarian public law firm. “Netflix disrupting Blockbuster videos — anyone who kind of comes in and shakes things up. And certainly that’s what food trucks have done.”

Indeed, the recently formed downtown restaurant association in Battle Creek argued in its letter to the city that food truck operators have “little, if any, investment” in the city and that mobile vendors “plunder business developed at great expense to restaurants.”

But many dispute that, including the Institute for Justice, which has advocated for food trucks — and limited regulation — across the nation in recent years. Its National Street Vending Initiative released a report in November, arguing that food trucks do not pose a threat to a city’s existing restaurant industry — they strengthen it.

7 Myths and Realities about Food Trucks by Jennifer Bowman

Food trucks have attracted both new residents and tourists to a city by growing the customer base, according to the report. It also argued they allow existing restaurants to market and expand their businesses by launching their own food trucks, and even provide a pathway for chefs to start with mobile vending and later launch their own restaurants.

Right now, Arcadia Brewing Co. operates its Twisted Tail barbecue truck in the restaurant’s parking lot, which is permitted because it is not in Battle Creek’s central business district.

While the report conceded that restaurants generally are subject to higher costs than food trucks, it said “their return for paying all of those costs is getting the benefit of a fixed location and thus avoiding the many disadvantages that food trucks have.” It also said that some cities require food trucks to “associate with a commissary in which they can park and clean their truck, store their inventory and partially prepare food.”

Bacigalupi said at least one restaurant owner in Traverse City said his lunch business had suffered because of the food trucks, but some — including mobile vendors and even the owner of a high-end eatery near The Little Fleet area, where many of the trucks have gathered — said the ordinance has worked out pretty well.

“It depends on who you are, where you are,” he said. “I think the lunch business, the folks who depend on the lunch, are probably impacted the most, if at all. But again — there’s no question it has had a positive impact where Little Fleet is, on the east side of Front Street.”

While municipalities often compromise with restaurant owners on ordinances, setting distance requirements and other rules, Gall argues they should only set regulations addressing public health and safety — and not those “done to advance public interests.”

Gall and the Institute for Justice have filed several lawsuits against some mobile vending regulations. And they have been largely successful. It sued the city of El Paso, Texas, over its 1,000-foot distance restriction for food trucks before the ordinance was repealed by its elected officials. It also represented flower vendors in Hialeah, Fla., over its distance regulations near floral shops. The city also repealed its law.

Right now, it’s suing the city of Chicago over its 200-foot distance rule.

Gall said in his experience, most restaurant owners don’t have strong feelings over food trucks. But those who do, he said, often lobby for mobile vending limitations instead of asking government officials to remove burdens placed on restaurants.

“I guess no one wants a new competitor coming and challenging them, but again, consumers want it,” Gall said. “Consumers want more choices. And you know, city council members should think about that. Think about the choices they could be taking away from consumers, thinking about jobs if they allowed food trucks to operate in the area.”

But just as common as the unfair-competition argument from restaurant owners is that of food truck advocates who say they serve as an engine for economic growth and a boost to attracting tourists and new residents.

“I think it’s a real popular trend right now that we’re seeing in cities across the country,” Bauckham said. “Certain cities have better weather year-round that’s conducive to it than we have in the Midwest. But we have a couple food trucks that plan to operate year-round and we’ll see how that goes. But it’s been pretty exciting and we’ve monitored some of the other cities that have done it, the success they had. I think it’s important to have regulations in place so that you can have monitoring, particularly with the trash and garbage issues, and where you allow them to park and we don’t allow them to stay overnight in the spot.”

Bacigalupi said food trucks have gravitated to an area near The Little Fleet, a restaurant and open bar on the east side of downtown. It’s created a lively scene there, he said, “which was otherwise relatively quiet, mostly offices.”

“People who operate food trucks shouldn’t be asked to give up their rights in the name of compromise,” Gall said. “And it’s simply unfair, not just to them, but unfair to customers — just people who want access to these food trucks. The city council and restaurants don’t need to decide who gets what customers. That is now how the free market economy is supposed to work.”

Gall said often, a food truck operator’s ultimate goal is to open a full-time restaurant. And now, he said, restaurants are opening their own food trucks as a way to market their brand and expose themselves to different parts of town.

Operators of restaurants and mobile vending are finding a synergy, Gall said.

“And you can certainly see,” he said, “here in D.C. and elsewhere, people who have started food trucks are opening these brick-and-mortar businesses and creating many more jobs.”

‘Will the pie really get bigger’ in a small town?

But while large metropolitan areas have already tested the waters and now have well-established food truck scenes, it’s hard to point to them as supporting evidence for other cities.

Proof of economic benefits of food trucks in smaller places were difficult to find, said Bacigalupi — especially in seasonal towns like Traverse City.

“There’s a huge potential customer base (in big cities) and the concern here is, will the pie really get bigger? That’s the argument,” he said.

He added, “I suppose it’s safe to say the pie has probably gotten a little bigger but I don’t know how much bigger.”

“They’re not a fad,” he said. “Because they are spreading to medium-sized and smaller cities. They’re popping up everywhere. And obviously there will only be as many food trucks in the city as the market will support, but nonetheless, you’re seeing it happen.”