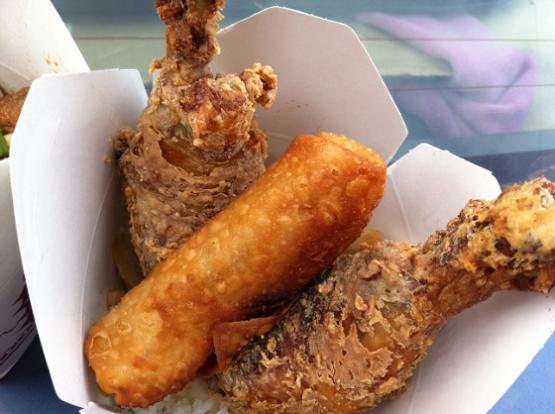 ​I don’t really get to keep up with the food truck scene much, owing to my almost total lack of ability to actually take a lunch break. The chances of me being able to leave the office for long enough to navigate the tunnels 50 feet below are frequently pretty slim; being able to actually leave the environs of downtown in search of mobile eats is basically a non-starter. But I was able to visit a food truck not once, but twice in the past two weeks. Ahh, staycation.

To say that the food at Rice Box incites cravings might be a bit of an overstatement, but not entirely off the mark. It might be more accurate to say that the idea of the food at Rice Box is mouth-wateringly addictive. There’s just something about fried nuggets of protein, garishly lacquered in sweet-tangy-salty-savory sauces, that creates the anticipation of instant gratification.

For me, the unapologetically American rendering of Chinese flavors – General Tso’s, Sesame Chicken, etc. – hits a comfort food nerve. Those flavors and textures are reminiscent of my first, youthful forays into the cuisines of Asia, no matter how Western the interpretation. Throw that stuff in a waxed cardstock carry-out box, and it resurrects food memories long forgotten, sending my pleasure center into an MSG-laced tailspin.

As for its other qualities, it’s a bit hit or miss, but even the misses are gratifying. More like glancing shots, really.

​That General Tso’s is admirably balanced, needing only a bit more acid and maybe some heat for the sauce to really shine. The lacquer had a nice depth of flavor, with the earthy punch of prunes providing an intriguing backbone that took me a few minutes to pinpoint, but came across a bit thick, texturally.

The deep-fried nuggets of chicken were crisp and moist, mostly. A few of mine seemed to have sat a bit long while awaiting what is almost certainly their second turn through the wok, their coating turning a bit chewy, their insides a bit stringy. I could have used a few more crisp, frizzle-topped pieces of broccoli, as well. Still, I ate every morsel, strangely compelled by those familiar flavors.

My wife’s sweet and sour chicken was slightly less well-realized, its balance of acid skewed in the opposite direction, tasting thin and undeveloped. The idea was there, but the execution needed some refinement.

So, too, with the egg rolls served perched atop each entree. I’ve never been much of an eggroll fan, particularly the doughier Chinese versions. Give me a crisp, shattery Vietnamese egg roll, or count me out. That the Rice Box version, at least on one of our visits, were even doughier than is typical, made them my least favorite item. A longer trip through the fryer would have improved things, as it did on our second visit, turning them crispy with a tender interior, and quire alluring after all.

Everything hit better the second time around, though I suppose it’s fair to point out that our only repeats were those newly crisped and delicious egg rolls. The real star of that second trip, though, and likely of the whole venture, was the Golden Doomba Special. I’ve seen it rendered as various fried chicken parts, served simply over a bit of steamed rice with sauteed cabbage. This time, it was a pair of drumsticks, cracklingly coated with a thin, salty sheath of potato starch batter, which renders almost like tempura in its light cling.

The chicken underneath was moist, deeply savory, and completely arresting. Its crisp skin was deeply burnished, the bronzed tone and roasty character, along with the shattery coating, made me wonder if the bird had taken a turn through a hot oven before being battered and fried to order. Whatever they do, it’s phenomenal stuff. Salt, chicken fat, crunch. What more could you want? They serve a dipping sauce with it, gussied up ketchup, really. You don’t need it.

The other star that day was a side of simple fried rice. Light and delicate, the rice was tossed with sparing amounts of scallion, egg, and peas. A few bruinoised pieces of barbecued pork snuck their way in. The kicker? A scatter of panko on top, lending a remarkable amount of character to this otherwise austere presentation. Next time, I’m asking for this in place of steamed rice as the throne for that wonderful fried chicken.

I would come back for that rice and chicken combo, alone, and plan on doing so. The rest of it will serve as spur-of-the-moment hankering solution — for when I just have to have some General Tso’s — and will do so admirably. I can’t think of a place in town doing better versions of Americanized Chinese food, even with the few slight stumbles. To Rice Box owners Arthur Wentworth and John Peterson, who are fond of offering bite-size Mandarin language lessons to their customers, both in person and via their Twitter account, I say Tai Hao La! (forgive my Googled butchery of language).