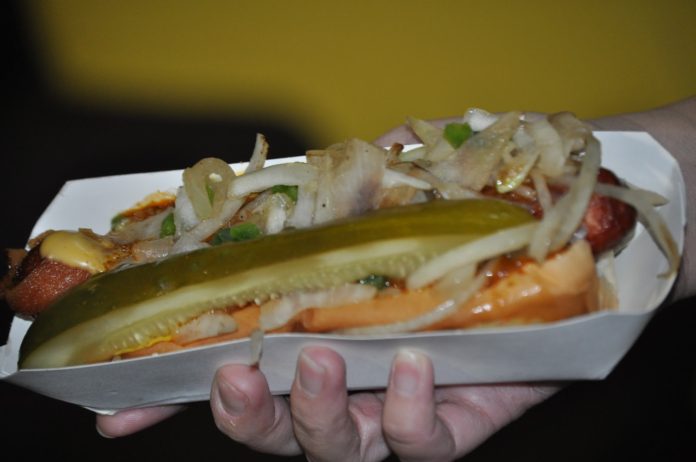 I ordered the Iggy’s Bleu, The Bomb and a plain hot dog. Yup, plain. Nothing on it, just the bun and the dog. My daughter is weird like that. When we got the plain hot dog, he gave us two. He explained that when it was fried it shrunk more than it should so he gave us two to compensate for getting a smaller hot dog than what is normally served. I will assume nothing was wrong with it because she and my son ate both of them.

The Bomb is a bacon wrapped hot dog topped with grilled onions, chili, cheese, and a dil spear with mustard spread on the bun.  Snap, Crackle and Pop  isn’t just for cereal anymore. When I bit into The Bomb, I definitely felt the Snap from the crispiness of the outside of the hot dog, then your teeth experience the Crackle of the crisp bacon and fresh toppings, and finally you experience the Pop of all the flavors as they bounce in your mouth.  This hot dog had a great balance of flavors and .

Although it’s called The Greasy Wiener, I think their sliders stole the show. The Bacon Bleu Igg’s. 2 Angus beef sliders topped with grilled onions, blue cheese, crisp bacon and special sauce inside King’s Hawaiian rolls. The pattie was so juicy and it wasn’t from the sauce or the bleu cheese. You could tell it was made to order because it was still warm and the bacon was still crispy. Bleu cheese is very strong, but in this slider, it wasn’t overpowering. The only thing I wished was that there was bacon in every bite.

Overall this was a solid experience. Nothing we tried tasted under seasoned, over cooked or worse undercooked. There were no out of the box menu items. The owners didn’t do a fusion or twist on anything. Just traditional hot dogs and sliders but made very well. Not only was the food good, the service was awesome. Thank you Adam and team!!