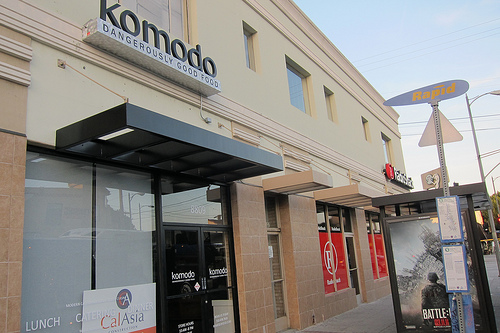 Komodo is the latest food truck (@komodofood) to go brick-and-mortar, opening a fast-casual and takeout restaurant in the heart of the Kosher Corridor. Located on Pico Boulevard just west of Robertson, Komodo should be open for walk-in business by March 23rd but will host an opening party this Wednesday night.

With more food trucks moving toward B&Ms (Frysmith just opened a commissary last week in Loaded and the porn-friendly Flying Pig truck is still working on opening a restaurant in Little Tokyo), the new location was natural evolution for the Komodo, which launched only a year ago and now has two trucks. Both trucks will continue rolling as the brand expands into a fixed location. The idea, according to co-owner Eric Tjahyadi, was to centralize all their cooking operations (truck, catering and restaurant) in one kitchen while allowing chef Erwin Tjahyadi (his brother) to expand the menu.

“We’ve always known that we were going to be a brick-and-mortar operation,” Eric says. “How big or how quickly, we left that up to the fans.”

There will be no set menu at the fast-casual eatery with a price-point of $10-15 for a typical meal. “It’s going to be a new feature every single day,” Eric says. “There’s going to be a ton of stuff. It’s a gourmet dinner experience to-go at an affordable price.” That means salads, sandwiches, tacos, skewers and more, all of it a mashup of market-driven California cuisine and Asian influences.

“The chef is Indonesian so he wants to incorporate some Southeast Asian flavors. He’s going to mix beef bourguignon with an Asian/California style.” It sounds strange to us, but if someone had pitched us a business model built on kimchi-laced tacos in the pre-Kogi era, we also might have been skeptical. Komodo will have a few tables, though Tjahyadi expects the restaurant to focus on takeout. Popular items from the trucks, which will also be refreshing their menus more often, will also show up in the restaurant’s menu. Built on profit from the mobile business, the B&M is being opened with no investors except the original fivesome who launched the business: the Tjahyadi brothers, Mike Cho, Phil Seo and Thomas Choi. With 50% of their revenue coming from catering private events and working craft services, Komodo needed a central location with room for growth. Chef Erwin was also itching to expand his repertoire.

“My chef wanted to makes sure he’s still in touch with his creativity as a chef,” Eric says. “If you do the same thing over and over, you don’t grow your creativity.”