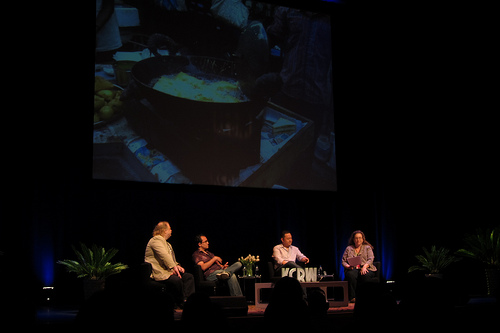 If you’ve been to some of the apallingly oversold food truck festivals of the past couple years, the sight of lines snaking around food trucks outside the Broad Stage on Sunday morning should have sparked a PTSD flashback. No need to worry. These lines moved fast (comparatively speaking) and most of the food was actually worth the wait.

But before all that, before the deep-fried shrimp tacos of Mariscos Jalisco, the coconut curry of India Jones or the caprese empanadas of Piaggio on Wheels, there were words. For KCRW’s Global Street Food discussion, Good Food host Evan Kleiman was joined on stage by Jonathan Gold, Gustavo Arellano, chef Jet Tila and, through the magic of the internet, street food connoisseurs and writers Lesley Tellez (in Mexico) and Robyn Eckhardt (in Malaysia).

The topics ranged from asam laksa to Kogi imitators, from the death knell that is letter grades for food trucks to the shadow economy of Mexican street food vendors, from the orderly street hawker scene of Singapore to the Wild West of Vietnamese street food.

The upshot: Almost everywhere else in the world has a richer, broader, more diverse street food scene than anywhere in the U.S. Weep for what you do not know you have lost.

10. “King Taco started in the mid-70s as a lonchera, and all his friends said, ‘Eat tacos off a truck? No one’s going to do that. And here we are.”
-Gustavo Arellano

9. “I feel ripped off because we’ve been doing it forever.”
-Jet Tila on Street’s kaya toast

8. “Both Lesley [Tellez] and Robyn [Eckhart] told me that if they ate as much street food as they wanted, all day every day, they’d be enormous.”
-Evan Kleiman

7. “It’s all about grazing. Malaysians seem to be eating 24 hours a day. If you have the stomach and the fortitude, you could start at 6 a.m. and not finish until midnight.”
-Robyn Eckhardt on street eating in Malaysia

6. “I remember eating a warm brioche stuffed with ice cream in Italy, and I thought, ‘Why hasn’t anyone done that here?’ it’s the best way to start your day ever.'”
-Evan Kleiman

5. “In Asia, you would never eat anything grilled on a stick at a restaurant.”
-Jet Tila

4. “Hanging under all these greasy bits of paper were entrails, and you got a cone of raw pig fat salted and with lemon juice on it. Hardcore.”
-Evan Kleiman on “Neapolitan sushi”

3. “Some are good, some are dreadful. I don’t think it’s accidental that most of the time they have those competitions, the traditional loncheras win. Lux loncheras are catering to people who love the novelty.”
-Jonathan Gold on the wave of nouveau food trucks

2. “As a Mexican living in the United States, your whole life is a bunch of ‘eros.’ Loncheros, taqueros, paleteros.”
-Gustavo Arellano

1. “When it’s done properly, taco should be a verb.”
-Jonathan Gold