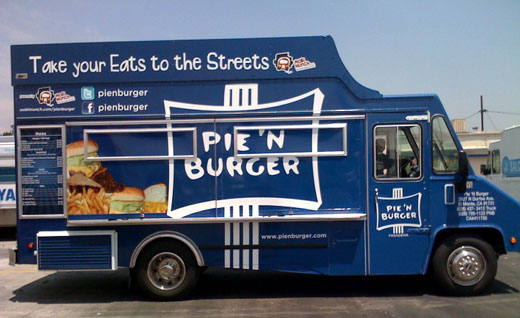 Just as food trucks started running for shelter, the trend keeps pulling restaurants in. The past week has seen a sort of reversal here, despite that big story excoriating our food truck scene. While Flying Pig, Cafe con Leche, and Komodo are following Pinocchio’s lead and turning into “real restaurants,” some of L.A.’s more established brick and mortars are going into the trucking business. So, who’s next to join the fleet?

On the heels of popular caterer Heirloom L.A. launching a truck, Tamara’s Tamales’ announcement yesterday and recent contemplation from Chego on starting their own truck, Squid Ink tells us Pie ‘n Burger is setting up to launch its a vending vehicle of its own, with the debut most likely next week.

Since food trucks have done their best to give us every food item we’d never conceived of, it’s kind of refreshing to hear that the Pasadena stalwart will deal in a simple, oh-so SoCal menu of burgers, Farmer John hot dogs, and sandwiches. It sounds like you’ll see the truck mostly cruising in Pasadena (which already has its own Pie ‘n Burger, we may grumpily add) and at food events. Follow the truck on Twitter to track its launch date.