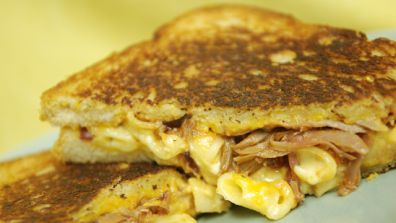 It’s reliably predictable sameness often relegates beloved mac and cheese to the kiddie table, but these Mac Daddies will convince you that the childhood favorite belongs front and center.

You know those guys who walk barefoot on hot coals? That’s kind of what Chef Phil Deffina of New York City’s Highpoint Bar and Bistro does (with his hands) to make his Serrano Mac-n-Cheese Poppers. Think arancini (deep-fried risotto balls) meets jalapeno poppers.

Deffina blends heavy cream, Muenster, American and mascarpone with garlic, salt and pepper, and minced serrano and aji amarillo, a Peruvian hot, yellow pepper. He tosses it with just-cooked pasta, then uses an ice cream scoop to molds the molten mixture into balls. “It’s the only way to do it,” he explains flashing reddened palms. He rolls it in panko, dips it in egg white, panko again. He deep-fries and plates it with a mayo/sour cream/ shaved garlic/chive sauce. He’s considering amping up the poppers with crab or Serrano ham. One can only hope.

Thanks to Los Angeles’ The Grilled Cheese Truck, “handheld” and “mac and cheese” now go together in the Cheesy Mac and Rib. Insiders call it “the fully-loaded,” says Executive Cheese Officer, Michele Grant, who also runs Comfort Food Catering. The inspiration came when her partner, Chef Dave Danhi, entered a similar sandwich in The Grilled Cheese Invitational. Yes, that’s an actual event. “Mostly what we do is bread, butter and cheese,” she says, “and it’s the best you’re going to get and that includes the ‘fully-loaded.’”

First, they put a rub on a hunk of pork butt, smoke it for five to seven hours then finish it off in an oven. Then they slather the outside of artisanal Pullman-shaped French bread with a whipped butter-mayo mixture for grilling. (White bread is too soft and won’t hold up). On the inside is a layer of cheddar, a slab of mac and cheese, more cheddar, pulled pork with bbq sauce, caramelized onions and yet more cheddar. Then it’s grilled.

Grant, who surprisingly specializes in healthy cuisine, says that while anything’s okay in moderation she doesn’t recommend eating the Mac and Rib everyday. But that’s the whole point. Comfort food is an always hearty, sometimes fancied-up, impossible-to-resist calorie-fest that’s best eaten only occasionally.

At Chicago’s The Southern, Georgia-born chef, Cary Taylor, serves up traditional southern mac and cheese with pimento, cheddar, pepperjack and horseradish. But he pushes the envelope at his “rolling restaurant,” The Southern Mac & Cheese Truck, where he turns out Blue Cheese, Smoked Bacon and Mushroom and Crawfish, Spicy Andouille and Pepperjack.

Taylor says Matt Moroni, the father of Chicago food trucks, told him, ‘you don’t do lunch at The Southern, so why not do a truck?’” Chicago bans cooking in trucks, so Taylor had to figure out what he could make in advance that would hold-up to sitting around in warming ovens and still have integrity. “Mac and cheese,” he says. “The only people who don’t like it are lactose-intolerant.”

Truffle Infused White Cheddar is the overall best-seller but preferences vary by intersection. Pulled Chicken with Buffalo Sauce and Blue Cheese is tops at Randolph and Franklin. Grilled Hot Dog and Creamy Cheddar is big at the Merchandise Mart, while those at Monroe and Wells prefer Italian Sausage with Hot Peppers and Mozzarella. It’s been so successful that by the end of the month Taylor will open a brick-and-mortar The Southern Mac and Cheese Store.

The “fondue” in the Mac and Cheese Croquettes with Cheddar Fondue at the bucolic Tavern at Lark Creek in Larkspur, CA isn’t melted cheese. It’s hot, cheddar-infused heavy cream that Chef Aaron Wright aerates and shoots out of a whipped cream canister, then tops with shaved Parmesan.

Wright works the same mad-scientist vibe on his mac and cheese. He makes a base with heavy cream, milk, onion, cloves, and a bay leaf and strains it. He then whizzes cheddar, Gruyere, Parmesan, the cream sauce and cooked pasta in a blender, creating a kind of edible adhesive. He blends that mixture with the rest of the pasta, presses it into a baking pan and refrigerates. He slices the cooled mixture into four-inch logs, dips them in an egg wash and panko, and flash fries to order.

Sometimes the best part of going out to eat is when you find a chef who takes the ordinary and the familiar and gives you an entirely new eating experience.