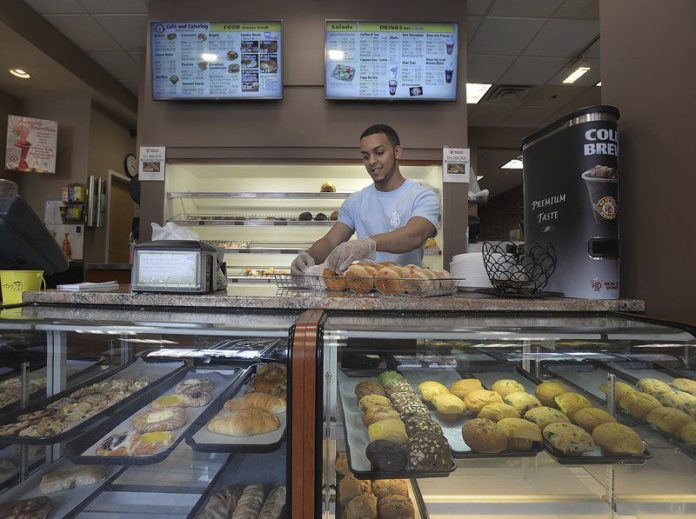 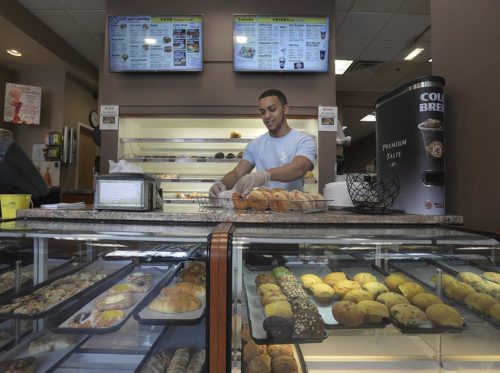 LAWRENCE — A fleet of food trucks rolled into the city last week and opened for business in a courtyard beside City Hall, where they served up tacos and teriyaki and a full plate of controversy over whether they’ll be good for traditional downtown restaurants and sandwich shops or siphon off their fair-weather customers.

The small circle of trucks on Pemberton Way and the entertainment that will accompany them on Thursdays and Fridays through June is part of Mayor Daniel Rivera’s effort to re-energize downtown and remake its image, including by bringing back pedestrians whose spending won’t end at the food trucks.

“This is an event to raise the profile of downtown Lawrence,” Rivera said as he settled into a plate of tacos and Chinese food and a glass of lemonade, which he first photographed and posted on his Facebook page, along with a note inviting anyone reading it to “Come down.”

“The only way everyone makes more money is if there are more people down here spending money,” Rivera said. “I understand some businesses might be a little afraid of this. Change is scary. But we can’t keep doing things the way we have been and expect things to get better.” 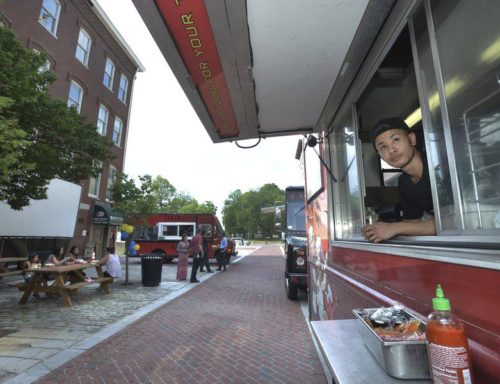 “We pay almost $10,000 a year in (property) taxes and they’re not paying anything,” Griskevich said. “We have to pay for all these different licenses. Go to City Council meetings (for permits). As business owners, we have to go through all the channels and they just pull up there on the sidewalk.”

She said business at her doughnut and sandwich shop was down Thursday, but couldn’t say how much.

The food trucks pay no rent to the city, but need a menu of official permits similar to those required of Heav’nly Donuts and Lawrence’s other brick-and-mortar restaurants. Those include approvals from fire and electrical inspectors and a health permit that requires inspectors to check that vendors are maintaining proper cooking temperatures, getting food from approved sources, accurately stating ingredients and practicing good hygiene, including mainlining clean surfaces. A hawkers and peddlers license from the state also is required. Each permit has a fee.

On Thursday afternoon, city food inspector Valda Miller swirled through the Pemberton Way courtyard, wearing a tidy hair net — no vendors wore one — carrying a clipboard and climbing into the four trucks for another look at the kitchens and staff.

“I don’t know about the (allegations of unfair competition),” Miller said. “But all these trucks have permits.”

Abel Vargus, the city’s director of economic and business development, was close behind her, although he stayed out of the trucks.

“People come here and they feel safe,” Vargus said, echoing his boss, the mayor. “It creates a destination, diversifies options. One person wants Asian, another wants tacos. They can sit at the same table.”

Han Lin, the manager of the Teri-Yummy food truck, which serves teriyaki seven ways and $1 drinks, showed a reporter a fistful of his official permits and noted that the small food truck park in Lawrence serves a resurging interest in meals on wheels that is occurring nationwide. As close as Boston, a rotating fleet of 32 trucks – 16 at any one time – operates at South End Open Market on weekends.

Through their windows, food truck chefs feed the hungry with snacks and meals as pedestrian as hot dogs and lemon-flavored shaved ice and as exotic as the elk and alligator burgers that the Dark Side of the Moo truck offers at a food truck park in Secaucus, New Jersey. The industry has spawned its own festivals across the country, including one in Stoneham in October.

“I think of it as friendly competition,” Lin said. “Every block should have three restaurants. In New York, there are more and more restaurants and the food gets better and more affordable.”

Mary Guerrero, owner of Cafe Azteca on Common Street and El Taller on Essex Street, waived off concerns that the food trucks will steal her business. She said she offers something they can’t.

“We have a liquor license,” Guerrero said. “If someone wants a beer, they have to come to our place.”

The food trucks will be at Pemberton Court on Thursdays and Fridays from noon to 6 p.m. for the next six weeks.