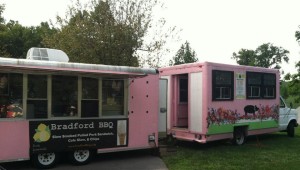 Lexington’s food scene is expanding into small places. Street corners and sidewalks are being overtaken by mobile kitchens – food trucks – that come in all shapes, sizes and types.

It’s a weeknight at West Sixth Brewing Co. in downtown Lexington, and just outside the brewery, a delicious scent is in the air. It’s not the beer, though. It’s the spicy pork bowl and pumpkin curry at A Fork in the Road Mobile Galley, the food truck stationed outside for the evening. Mark Jensen is the owner and he’s serving up hot food on this cold night to customers looking for something to pair with their pints.

A Fork in the Road is just one of several food trucks that rotate through the spot outside West Sixth on any given night, serving up a variety of cuisine, from pizza to barbecue and Hawaiian or Greek, or, well, whatever the chef feels inclined to make.

“I make my food based on a whim,” Jensen said. “Whatever suits the weather, or is seasonal or available. I try to source as much as I can locally.”

A Vermont-native, Jensen moved to Lexington and began catering. He has been in the restaurant business as long as he can remember, and though his day job catering is a good one, there was something missing.

“I missed being on the line with a whole row of tickets, making food and having conversations,” he said. “I was thinking about food trucks for a number of years and finally decided that was what I was going to do to supplement the catering.” 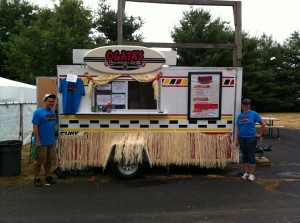 “It’s been awesome to be able to offer our patrons a food option beyond beer cheese and pretzels,” he said. “With all the great food trucks popping up, we have been able to offer a wide array of cuisines, and I think this variety contributes to the excitement at West Sixth.”

The Bradfords have been working on their food truck business in addition to their regular jobs – Matt is in the restaurant business and Jennifer is a nurse. But Jennifer is the inspiration behind their particular offering: Memphis-style barbecue; Jennifer moved to Lexington from Memphis, her husband from Los Angeles. It was here in the Bluegrass that the two met and married. Somewhere along the way, they bought a food truck and started experimenting. 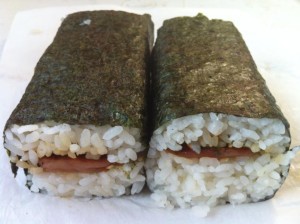 “I wanted real Memphis barbecue, and it didn’t seem anyone around here was doing just that,” Jennifer said.

Matt worked on different recipes for five years until one of them got his wife’s approval.

“We used our friends and family as guinea pigs and just tried out different methods,” he said.

The Bradfords seem to have hit on something. They routinely find themselves staying up all night preparing food for the truck or a catering gig. The couple has expanded their offerings to include a concession trailer that features funnel cakes, ice cream and cake.

It’s a lot of work for two people, especially two people who still have their regular jobs. But the Bradfords seem to agree with Jensen: They do it for the love of the food, fun and their customers.

The food truck movement has a grassroots feel. Much of the interaction, planning and scheduling takes place on social media sites such as Facebook and Twitter. Food trucks even use these mediums to announce menus, locations and events. The food trucks also seem to indicate the presence of ingenuity and entrepreneurial spirit.

“I think the growing food truck scene reflects what is happening in Lexington’s food scene more broadly,” Fay said. “Folks are getting more adventurous, and with that they are demanding more options. The food trucks display people creating an opportunity out of that demand. The wide variety of the food trucks also says something about diversity in our community.”

The presence of the trucks says the city is “progressive and progressing,” Jennifer Bradford said.

An association for the Bluegrass area has been formed to provide a voice for food truck owners and an avenue for discussion, expansion and support of the mobile commissary business model in Central Kentucky. The Bluegrass Food Truck Association has played a large role in the ongoing regulations debate with bricks-and-mortar restaurant owners and city leaders.

“The association is really there to track where everyone is, but also to help people get started with food trucks and to make sure we operate right and do it right,” Matt Bradford said.

Food trucks can be found just about anywhere – at farmer’s markets, special events, lunchtimes and late nights around Lexington. If you’re feeling the crave, but you’re not sure where to start, check out one of these locations.