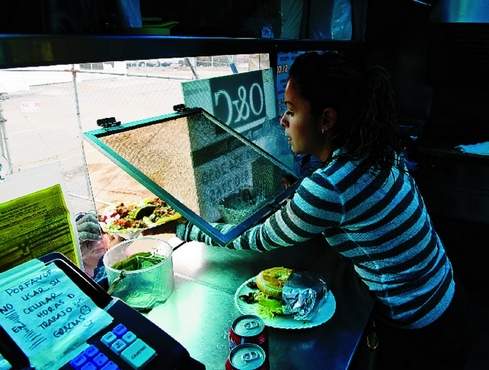 LODI – The line at the La Picosita taco truck in Lodi moved like a revolving door at lunchtime Wednesday, its customers eager to place their cash orders for authentic Mexican food.

The priciest item on the menu, a super burrito, is $4.50. The smell of cilantro, onions, and a hint of lime permeate through windows of the mobile kitchen.

“I feel like the mobile food movement is huge,” said Patrick Shannon, a 24-year-old Lodi engineer, who sat nearby eating tacos with a friend.

This summer, Shannon and other taco truck regulars will have a chance to help decide which of Lodi’s vendors offers the best fare in town – at the city’s inaugural taco truck cook-off. It’s an event some say could help forge a bond between the city and the mobile food vendors who have been the center of controversy in recent years.

The tables seem to have turned. In June, the vendors will engage in a friendly cooking competition to help the city’s Art in Public Places Committee promote mosaic tiles that have been built into the sidewalk on Lodi Avenue.

The idea is being embraced by city officials and vendors, perhaps ending an era of heavy scrutiny that lunch wagon owners have faced in recent years, and culminated with a 2009 ordinance that capped the number of mobile vendors allowed to operate in city limits to a total of 22 – including all lunch wagons and ice cream carts – and placed heavy restrictions on how and where they can operate.

“It is kind of odd that we are now invited to be in a city event,” said La Picosita owner Veronica Gomez, who is hopeful her summer schedule will allow her business to participate in the cook-off. “It definitely makes us feel more accepted.”

Mayor Bob Johnson said the 2009 ordinance was necessary as loose restrictions led to some problems and a variety of community complaints. The city had seen dozens of mobile vendors open shop, they didn’t have adequate access to bathrooms, and some were operating too close to residential neighborhoods.

“In some circles, taco trucks may not have had the best reputation,” Johnson said. “I feel it’s a legitimate business staffed by hard-working people – and a lot of them produce some pretty darn good food.”

The city’s acceptance of the carts is welcomed by customers.