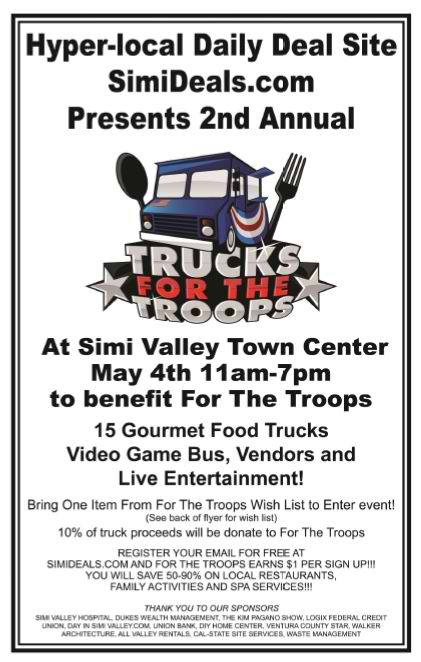 The second annual Trucks for the Troops will bring together more than 15 food trucks selling various delectable edibles in the name of supporting U.S. troops deployed overseas.

Presented by local daily deal sites SimiDeals.com and ConejoDeals.com, the foodie fundraiser will make its return to Simi Valley from 11 a.m. to 7 p.m. Sat., May 4.

This year’s event—the largest gathering of food trucks to ever take place within the city— will be held in the parking lot of the Simi Valley Town Center.

The food truck festival will benefit Simi Valley-based nonprofit For The Troops. Each gourmet eatery will donate 10 percent of its proceeds to the organization, which sends care packages to military men and women serving overseas.

Since its formation in 2006, For The Troops has sent nearly 75,000 care packages to American soldiers and Marines stationed abroad.

In addition to raising muchneeded funds, Trucks for the Troops will generate hundreds, if not thousands, of donated items for those care packages, as the price of admission is something from the For The Troops wish list.

“ Conejo Deals and Simi Deals already support dozens of local charities and schools through our Give Back Program and have donated more than $150,000 back to the community in less than three years,” said Wendy Jaffe, CEO of the two deals sites. “We knew that with our large local database, we could get thousands of our members to donate a For The Troops care package item.”

Organizers hope to more than double those amounts. They’re expecting 5,000 people to attend Trucks for the Troops this year.

Attendees can bring an item to the festival or purchase an item at the event at the SimiDeals.com commissary.

In addition to the wide variety of food trucks, the festival will feature a 40- foot video game bus, more than 20 vendors, and live music and entertainment, including a demonstration by the Simi Valley Police Department K-9 Unit.

For event information, visit TrucksfortheTroops.com. To learn more about For The Troops, visit www.forthetroops.org