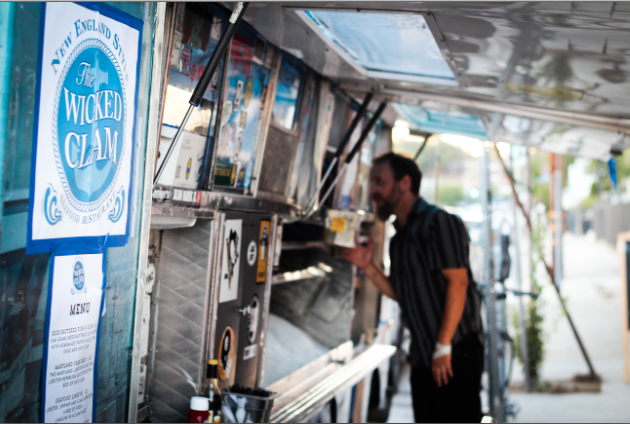 By Sarah Corsa  |  The Occidental Weekly

The grab bag of food trucks that gathers on Figueroa Street and York Boulevard is a trap for the indecisive. Every Tuesday, seven or more trucks convene in the parking lot behind the 99 Cent Store from 5:30 to 9:00 p.m. Although the trucks rotate every week, the multitude of cuisines is incredible.

India Jones serves Indian street food including an assortment of breads, curries and chaat, a mixture of spices and chickpeas smothering a potato pancake or samosa. The butter chicken curry is more decadent and rich than most savory foods due to the creamy sauce over moist shredded chicken. Their heavenly naan has the perfect amount of garlic and butter to merit a trip to the food trucks just for this item.

Additional dinner options include traditional Argentinian food from Cambalache’s, Vietnamese from Mandoline Grill, Cuban from No Jodas Kitchen and soul food from Slap Yo’ Mama. The list could go on –– this selection isn’t exhaustive of all the possible vendors on any given Tuesday. Although Lomo Arigato and Mandoline Grill attend the event every week, the remaining trucks rotate through depending on the week.

Choosing a dessert truck is just as hard. The options include custom ice cream sandwiches from Coolhaus or a chocolate-filled cupcake with weightless whipped frosting from Royal Red Velvet Cupcakes.

The Figueroa and York food trucks began as a business strategy conceived in the South Bay by Eric Nagata, owner of Lomo Arigato. He noticed that after partnering with another truck, they both got significantly more customers. Because food trucks do most of their advertising through Twitter, gathering in one location means that one truck’s marketing efforts benefit all of them.

“[We said] I’ll tweet my people, you tweet your people,” Nagata said. “We all try to gather [the customers] in one spot instead of having them have to drive all around town to try every one of us.”

Four years ago, the idea expanded to become DinDin-a-Go-Go, a company that organized and hosted food trucks in a variety of locations. The Figueroa and York event began about a year and a half ago in February 2011.

Seansay Clayton runs Royal Red Velvet Cupcakes with her husband, Alan. They attend the event monthly and noticed that the consistent gatherings are a win-win arrangement for both locals and vendors.

“The local community is the one that benefits from it, not to mention the trucks,” Clayton said. “I think the community really looks forward to it and they know that every Tuesday it’s going to be a different set of trucks.”

The constant shuffling in the variety of food may not make it any easier to decide on a dish but it certainly keeps people returning week after week.

When asked if he had any regulars, Nagata smiled as if he had a few customers in mind.