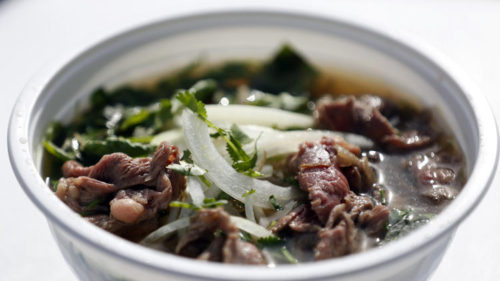 Pho, the Vietnamese soup typically made by boiling down oxtails or short ribs into a luscious, fragrant soup (this is the CliffsNotes version), is time-consuming and difficult to get right. It takes practice and real skill to know how to pull the nuanced flavors from the herbs and the bones — each slurp a delicate balance of star anise, cloves, ginger and just the faintest hint of cinnamon. The broth is usually accompanied by rice noodles, slabs of brisket, slivers of beef and meatballs.

So it may come as a surprise that there is really good pho coming from a Cambodian/Taiwanese fusion food truck called Pho King Awesome. Yes, that is the real name. Say each word clearly and slowly unless you want your co-workers to tilt their heads in confusion when you tell them what you’re having for lunch that day. (Which is, of course, the point of the name in the first place.)

“We wanted something that set us apart,” said Jason Hong, who started the truck with his wife, Chanda, a little less than a year ago.

Hong left a corporate job, Chanda left her job as a nurse, and the two put all of their wedding money into the truck, which looks a bit like it’s wrapped in a hip tattoo parlor’s portfolio: There’s a spray-painted red rose along the back, crashing waves, the sun and a devil with fangs and horns looming near the pickup window.

So what does a Cambodian/Taiwanese food truck serve? A little bit of everything. There’s pho, fried rice with Chinese sausage, fried chicken, Vietnamese-style egg rolls, spicy “Asian” tacos and a version of Spam musubi.

Pho King Awesome simmers its pho broth on low for two hours on the truck, then brings it to a boil before service. It’s ladled into a large plastic bowl and topped with a handful of the herbs typically found on the side plates served with soup at Vietnamese restaurants, including holy basil and cilantro. Shred the herbs with your hands and drop them into the soup, squeeze the provided wedge of lime, add the slivers of jalapeño and raw onion, then dig in.

The beef is more shaved than sliced — the waif-like pieces cook as they float atop the liquid. Just pluck them out when they reach your desired level of doneness. There are squeeze bottles of hoisin sauce and chile paste by the pickup window if you’d like to use them.

Because its owners dub the truck’s cuisine “fusion,” a “phunky fusion rice” comes topped with pineapple, chorizo and scrambled egg; and the “OG” fried rice includes a more traditional list of Chinese fried rice toppings, including lap cheong Chinese sausage, scallions and scrambled egg, but with a drizzle of Chanda’s teriyaki sauce and a bright-neon, orange-flavored, creamy hot sauce that looks and tastes a bit like the Sriracha mayo found at sushi restaurants.

If you’re curious about the “Spamusushi,” imagine musubi, made with a slab of Spam on top of sushi rice, made into a maki sushi roll, with sushi rice and seaweed rolled around pieces of Spam, imitation crab and vegetables.

Chanda is also making her version of orange chicken, called Asian Cajun chicken. If you’ve been to an Asian tea house and had the popcorn chicken peppered with hot chile powder — the kind that you eat out of a white paper bag with a toothpick — you’ve had something similar. Chanda fries bite-size pieces of chicken, then tosses them in her teriyaki sauce with a drizzle of the orange hot sauce. The chicken is crunchy, sweet, and you can order the chicken by itself, or on top of rice, Panda Express style.

You can usually find the truck parked in the South Bay area or along Wilshire Boulevard in Santa Monica, depending on the day of the week. It’s also a regular at festivals and recurring food truck gatherings such as First Fridays in Venice. For exact locations and times, follow Pho King Awesome on Twitter: @phokingawesome2.