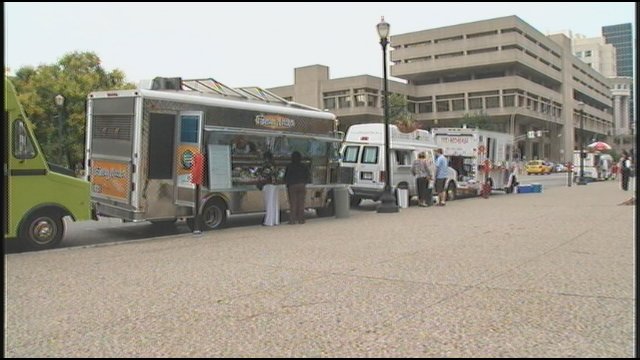 LOUISVILLE, KY. (WDRB) — Businesses last month say they weren’t prepared for the huge crowds at the Mayor’s Food Truck Parade, as many of them sold out of food.

Nine trucks lined up along Jefferson Street on Tuesday in front of Metro Hall.  Many patrons came out for an early lunch.  This was the second such event.  The first one was so successful the city decided to hold it on the fourth Tuesday of each month through October.

Vendors such as Kaaren Weyland who ran out of food last time say this time they came better-prepared:  “I have fresh wraps, sandwiches, soup, and all-fruit smoothies — healthy food for Louisville.”  Speaking of the previous month, Weyland said, “It was a great turnout, better than any of us expected, and of course we all ran out of food.”  She said she’d have to see if she brought enough food this time around.

The food trucks are expected to be on Jefferson Street until 2:30 p.m. Tuesday.