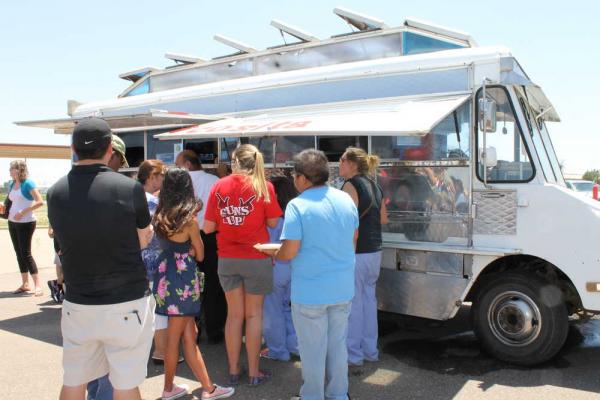 Netflix has five seasons of “The Great Food Truck Race,” and if you binge-watch them all you will finish with a hankering for food served on four wheels and eaten while standing on the street, with juice running down your arms as you go in for another bite.

Fortunately for Lubbockites, a local food truck owner is about to help with that craving. Cody Delgado, owner of Smokin’ Joes on the Go, organized a food truck festival this weekend at 30th Street and Slide Road, bringing together more than a dozen food trucks ranging from barbecue and tacos to desserts and drinks.

“We started out with a goal of six food trucks,” Delgado said. “It kinda escalated from there. We still have people calling us trying to get in.” 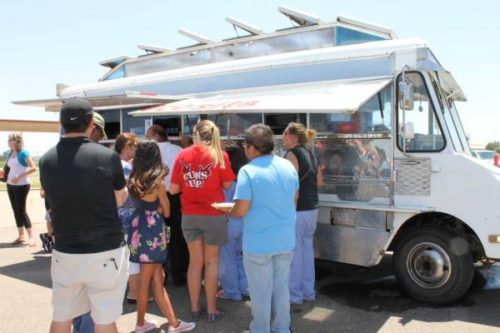 Delgado, who opened the truck with his wife a few months ago, got the idea after going to other festivals, including the city-sponsored food truck fest in October. He thought there was a good market in Lubbock, so he reached out to other food truck owners to gauge their interest. They were interested, and their customers seemed to be too.

One such truck is Ya Makin’ Me Hungry, a Mediterranean-Mexican fusion truck. The owner, who went to culinary school, makes gyro tacos — mostly traditional Mexican tacos but on pita bread and using beef and lamb.

Another is Kurbside Sweets, a dessert truck that opened in February. Owner Alan Vinson said he serves custom-made ice cream sandwiches. Customers pick their cookies and pick their ice cream. The truck is open for special events and when a business invites it to open on their property.

They’ve built a following as well, using social media to let interested customers know where to find them.

“It’s all social media-driven,” Vinson said. “We have a saying — ‘follow us to find us.’ If people will go on social media and follow us, then it reminds people where we’re at.”

Both owners said part of the reason they got into the business was the burgeoning popularity of mobile restaurants. After all, “The Great Food Truck Race” made a weekend stop in Amarillo, so why not Lubbock?

Delgado, who’s open every day at the same location where the food truck fest will be, said although it’s only been a little while the business has kept busy.

“As soon as we pull up we have people out there waiting for us to order,” Delgado said. “We have people call us, say ‘we’re here, where are you?’ ”

Larry Simmons, the organizer of the Lubbock Downtown Farmers Market, has had a front-row seat to the increase in food trucks throughout the city. For years there have been food trucks at the farmers market, but it used to be just one or two. In recent years the number has climbed steadily.

“We’ve always encouraged trucks to come down here,” he said.

In addition’s to Crusty’s Wood-Fired Pizza, which was a staple in past years, and the Holy Cow Beef truck, Simmons’ most popular truck is the Tall Cotton Kettle Corn. Many of the trucks aren’t traditional food trucks; they’re more concessions trailers that serve snacks and fresh beverages. Either way, food from a truck is popular.

In fact, its popularity was evident at the city’s first food truck fest in October. Simmons called it “a victim of its own success” — with thousands of people in attendance, there wasn’t enough room or enough food.

“That really shows the popularity of it,” he said.

Food trucks are becoming more common downtown, including at the First Friday Art Trail. Simmons wants to have one regularly outside the Tornado Gallery during the art trail. Charles Adams, at the north end of the arts district, and the Louise H. Underwood Center for the Arts also are working to get food trucks outside their buildings.

“I think it’s just a great part of what I would like to see as a Lubbock counterculture develop,” he said.

That’s just what Delgado is hoping to build on Saturday.

“I think they are really growing and they’re going to get bigger and better,” he said.

■ Ya Makin Me Hungry