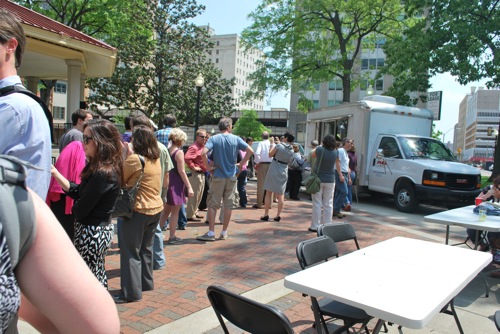 I arrived at the Food Truck Fare at 11:40 a.m., which I thought was plenty early enough to grab some grub and hurry back to the office. But the line at the Fuel Cafe truck was really long. I waited in this line for about an hour.

Once I finally made my way to the truck’s window, I was faced with a couple of choices. Vegan burger or vegan tacos?

I opted for the Vegan Taco Plate, two crunchy tacos stuffed with Fuel’s crumbled homemade veggie burger, vegan cheddar, salsa, lettuce, and non-dairy sour cream. On the side are black beans, rice, and vegan coleslaw. This meal was totally worth the hour-long wait. I wasn’t sure what filling to expect in the vegan tacos, but the crumbled veggie burger was perfect. It’s almost like I got two meals in one — the veggie burger and the tacos!