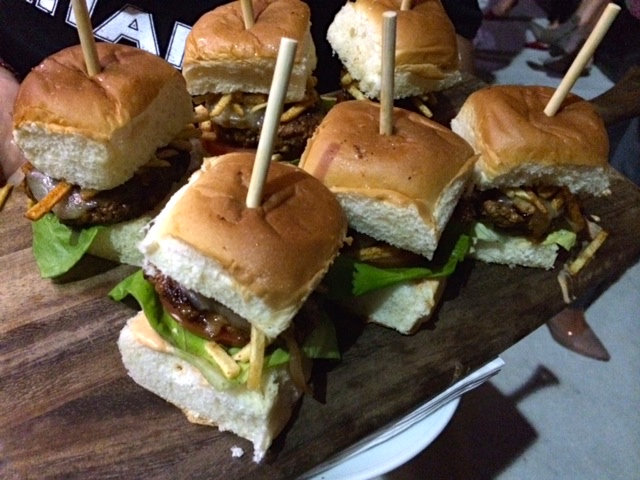 If you happened to be jogging through Brickell Avenue last night, you might have encountered something strange: a food truck stationed outside the Four Seasons and a pop-up bar a few feet away serving coffee cocktails and flutes of prosecco.

It was a preview party to kick off the five additional days that the Four Seasons food truck is going to be making rounds in the Magic City. Inside, Edge Steak & Bar executive chef Aaron Brooks was slinging Aussie cubanos and Miami burgers to any passerby’s and Brickell’s young professionals who came out to support the kick off of the roving truck.

Brooks looks at home in the truck, having fun and socializing with anyone who approaches the window. The Four Seasons truck is concluding its East Coast taste tour in Miami after having fed Boston, Philly, New York, Baltimore, D.C, Atlanta, Orlando, and West Palm Beach. Chefs from each city created menu items to be taken to the streets that would give the community a feel of what their restaurant is all about. Writings on the roof from its previous stops give the truck a Chef-esque feel. 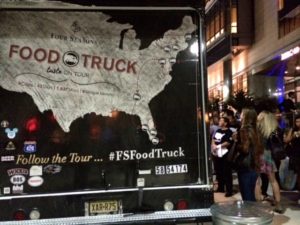 The truck will make its way to Alhambra Circle for lunch and tonight will be at Palmetto Bay Village Center from 5:30 p.m. all the way through 10 p.m. Tomorrow, it will tackle Wynwood Art Walk. “I’m ready for Art Walk. We’ll be serving some of our signature menu items and new Miami and Latin-inspired dishes — including my personal favorite, the Aussie cubano.” 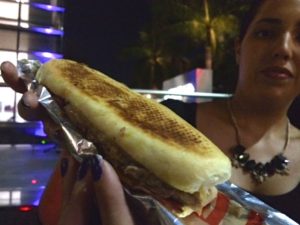 The Aussie Cubano is not your typical Cuban sandwich. Instead of regular ham, Brooks has utilized Australian lamb ham from his native land, as well as taken slices of pork for carnitas. The whole ordeal is brought together by oozing aged cheddar and slathered with beer mustard. We’re hoping this gets added to the menu at Edge. 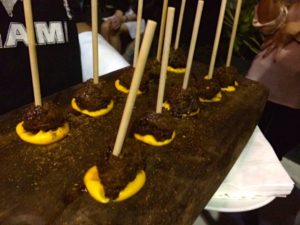 Chickpea croquettes were delicious and addictive. 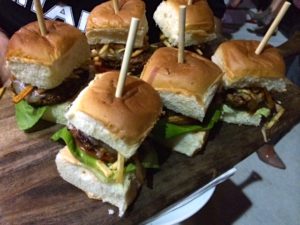 What’s a food truck without a burger? Appropriately titled the Miami burger, Brooks’ creation has got all the makings of a great American sandwich: chorizo, sweet onions, manchego, and tamarind barbecue sauce find each other between a bun.

As far as Brooks favorite local food trucks, he says, “Although he’s not in a truck anymore, Gastropod by my good mate Jeremiah Bullfrog was always a winner. He does have some things in the works so stay tuned. I’m also a sucker for a killer grilled cheese. The folks that run Ms. Cheezious know how to do it right!”

To catch the Four Season Food Truck follow the tour via Twitter and Instagram @FSMiamiand @EDGEMiami. Just ask the team for its location. For an interactive tour map and other delicious details, visit Four Seasons magazine.

A closing party will be held outside the Four Seasons on November 11 from 6 to 9 p.m. and in a similar fashion as last night — with a DJ spinning beats, a pop up bar serving drinks, and Aaron Brooks slinging Aussie cubanos.