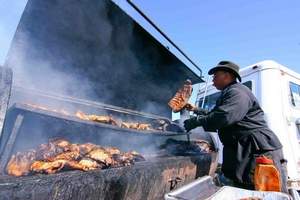 The wind picks up the aroma of smoldering hickory chips from Clint Johnson’s portable smoker and carries it far beyond his weekend roadside stand in Middletown.

It only has to travel seven blocks to reach Keith Young at his restaurant in Ashley Plaza, and that has Young smoldering.

“When he was on the outskirts of town, it bothered me but I didn’t say anything. Where he’s at now, it’s just too close,” said Young, who opened Young’s BBQ on East Main Street in 2007. “We need limitations. We need zones. We need boundaries.”

Young wants Middletown to ban mobile food vendors along Main and Broad streets because of the threat they pose to brick-and-mortar restaurants. He says the vendors have an unfair advantage because they don’t have the same overhead costs or pay taxes in town.

Tonight, the chefs are expected to sound off on a proposal to require formal permits for mobile food vendors, in addition to other restrictions that would make it easier to shut down food trucks or carts. A hearing on the proposed ordinance starts at 6 p.m. in town hall.

Local governments across the country have struggled with how to regulate mobile food sales without stifling competition, as food trucks surged in popularity in recent years.

Some places inspect the units for food safety only. Major cities, excluding Los Angeles, have rules keeping food trucks away from popular commercial districts where customers want and expect them to be. Food truck advocacy groups say the rules attempt to insulate restaurants from street competition, rather than promote health and safety.

“He sees my line outside here, and it drives him absolutely mad,” Johnson said of Young. “He’s done everything to derail me. It’s like Barbecue Wars.”

Middletown is not among the cities with fish-taco carts blocking sidewalks or cupcake trucks squatting in parking spots. Town staff counted three vendors besides Johnson in recent years – a hot dog vendor, a Mexican food truck and a weekend-only cart at a local church.

Johnson owns a restaurant and catering business in Smyrna, Oh’ Phoebe’s BBQ and Down Home Deli. Framed on the wall there is praise for Johnson’s chicken barbecue published by a New York Times critic in 2010. This is his fourth year trailering his portable smoker to Middletown for weekend sales.

“The amount of people I bring to the city on a monthly basis is something to reckon with,” Johnson said. “They come for the barbecue. They stay to shop or to fill up on gas or to head to the football game.”

His roadside sales overlap with Young’s restaurant for only three hours a week, he said. Young doesn’t open until 11 a.m. on Saturdays. Johnson starts earlier and sells out by 2 p.m. Johnson is also out there on Sundays, and Young’s is closed Sundays, except during the restaurant’s busier summer season.

Young blames Johnson for business being down 20 percent. New regulations would ensure an “equal playing field,” he said.

Town code doesn’t address mobile food vendors directly. Middletown has required them to obtain a business license and appear before council to place any conditions for approval on the record.

Johnson did so last December after relocating from the parking lot of a tractor-supply store to Farrell Roofing Co. at 225 W. Main St. He also presented a letter of permission from the property owner.

Mobile operations are subject to stringent health and safety requirements under Delaware law. They must carry a state business license and certification by the state Department of Public Health, which involves several steps to prove compliance with rules regarding on-board refrigeration, sanitation and structural stability, among others.

Mobile vendors also submit to inspections by the state once a year, at minimum, said department spokeswoman Jill Fredel.