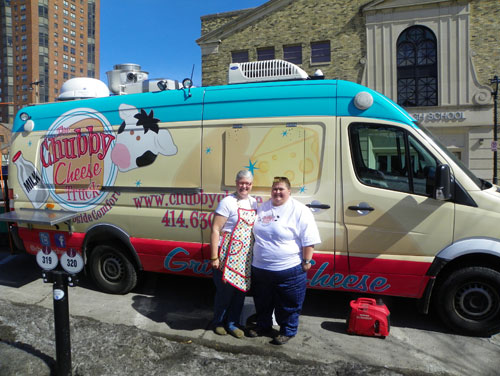 By Carol Deptolla | The Journal Sentinel

The women behind the cheese-oriented food truck, which began making the rounds in June at Cathedral Square and other mobile-meal hot spots, plan to open a café in spring in Bay View.

Katherine Tonn said the restaurant also will serve as a home base for the truck. Food trucks in the city are required to operate out of a licensed kitchen where they can wash dishes and prep food; Chubby Cheese Truck, like many others, currently rents a licensed kitchen.

She said their original name for the restaurant — KT’s Café — is being abandoned to avoid any confusion with Miss Katie’s Diner. The new name likely will be KT’s Recipe Box.

Because neighbors have been welcoming, stopping by to see how the café is progressing, the owners plan to feature guests’ recipes and the stories behind them in the café.

The restaurant is expected to be open for breakfast, lunch and dinner, seating around 75.