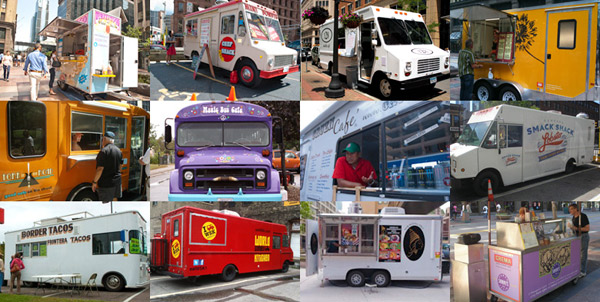 Around this time last year, Minneapolis’ City Council approved a trial expansion of mobile food vending into the city’s Downtown Improvement District. As we reported at the time, the proposal was met with enthusiasm from council members, mobile food vendors, and downtown businesses. No one knew how the concept would take off once the wheels finally hit the ground, but Twin Citizens and vendors alike have been surprised by the results thus far.

Now that the trial period has expired, City Council must decide on whether or not to allow the expansion to continue. Council Member Lisa Goodman‘s policy aide, Doug Kress, has been working with vendors to craft the language of the revisions; he solicited their opinions on what worked, what didn’t, and what they want to change. He graciously spoke to us via telephone to give us an update on the project’s progress. [Note: As of this writing, the revisions are currently being read over by the Council’s Regulatory, Energy, & Environment and Zoning & Planning Committees.]

Can you tell us how you think last year’s mobile food trial run went?

I think it was a great success! When we started, we didn’t know how many people would end up doing it. We ended up with a great variety of foods, which became a great opportunity for people to try something that was a little different from their daily routine. We brought last year’s vendors together to gather their input, and though they admitted that there were bumps in the road, they also acknowledged that it was only the first year. There were going to be growing pains. Even so, they still agreed that it was successful and enjoyable.

As for the opposition that surfaced that the beginning of the trial, we didn’t really hear complaints from local businesses with regard to competition from the mobile vendors. Some other businesses were concerned that the pavers on Nicollet Mall would suffer from bearing the weight of the carts and trucks, but we haven’t found any evidence of that so far.

You’re currently working on revising the language of several ordinances to make a more lasting place for street food here. Can you summarize the changes, and how they’ll expand on last year’s pilot project?

First, the revised ordinances will potentially allow street food vendors to literally be on the street. All they would have to do is plug the meters of the spots they take up, though they would be limited to using two consecutive meters at a maximum of 4 hours. Unlike last year, they would not be given designated locations: They’ll be operating truly mobile units. We’re also going to allow them to operate in the entire downtown area — not just the Downtown Improvement District. We’re looking at identifying a couple of locations elsewhere in the city, such as the West Bank and Chicago Ave and Lake St. However, it’s up to the vendors themselves to decide if they actually want to go there. If it works out, they could be in Downtown for breakfast, then serve lunch somewhere else, then dinner somewhere else.

The Park Board (a separate jurisdiction) is looking at allowing the Food Units in their parking lots. It is my understanding the units would need to apply for a special permit issued by the Park Board to allow access. The units would not be allowed during events when other food vendors are part of the events (such as Pride, Aquatennial, etc.) unless the unit has an agreement with the organizer. This mimics the current ordinance for other “events.”

One thing that won’t change from last year is the requirement that every unit must be tied to a commercial kitchen in the city of Minneapolis. That means that the kitchen must be licensed and inspected by the city and have commercial-grade equipment. [Note: This includes cooperative kitchens like Kindred Kitchen in North Minneapolis and Kitchen in the Market at Midtown Global Market.]

Do you think your revisions will be approved by City Council, more or less intact?

Our final draft isn’t completed yet, but I think it will go through. We don’t want to change too much from the language of the trial because that first year was so successful. The most important thing is that we want to minimize the parameters for mobile food units while keeping them accountable to the city. We don’t really have an ultimate goal with this project because it’s always going to be evolving. That’s part of the uniqueness of street food, that it’s constantly changing. What remains true regardless is that it’s a unique way of dining; it’s a great way to experiment and expand your own taste buds and horizons. It’s also a chance for entrepreneurs to try something new, themselves. Ideally, we would love to see successful street food vendors expand to brick-and-mortar locations.

Finally, do you believe that street food can really take off in Minneapolis?

I really think it will. However, I also think that it’s going to depend on the vendors, and what kinds of food and unique qualities they bring to the table. The food still needs to be creative, affordable, different from typical restaurant food, and fast. It also has to be something that’s a little intriguing to people.

I think Minneapolis will be one of those locations where people will find that really fun and interesting food culture. Our distinct challenge is that our season can be limited. It’s hard to be out on the streets in the winter — would you want to be out there all day? I hope vendors can find some way around that.

Interested in starting a street food business and want to learn more about the process? Kindred Kitchen is holding a round table with Doug Kress, as well as food truck inspector Ryan Krick, food truck licenser Craig Eliason, and several industry figures Mar. 28. Sign up here.