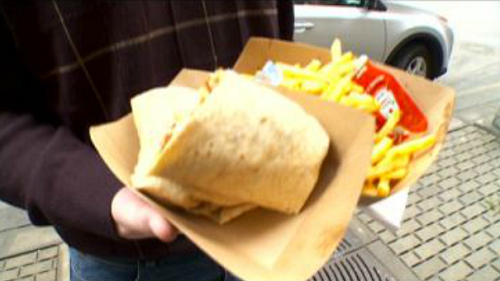 For instance, on Marquette Ave. and 7th Street, light jacket weather equals heavy foot traffic in the food truck lines. Kyle Steinke went without a coat to pick up lunch.

“Got a chicken ranch wrap and fries, food is pretty good on the food trucks,” Steinke said.

Thomas Penn of Robbinsdale said, “I’m surprised. Usually you see them, beginning of April. I think they’re taking advantage of the weather too.”

“Oh it’s just night and day difference when we can get customers out on the street and there’s kind of the spring pop of everybody seeing the trucks right now and coming out and trying them all,” Spica said.

The early Spring-like weather is also good for the team at Nice Ride Minnesota. Anthony Ongaro is the marketing director.

“We can’t wait to get these bikes out and we’re targeting April 1 to have them on the street ready to go,” Ongaro said.

Ongaro said the rentable rides will be out two weeks earlier than they were last year.

“This one has been an early season for sure. It got warm very quickly and we’re super excited at Nice Ride,” Ongaro said.

It seems around here, a few extra degrees make for financial and personal gain.

Nice Ride is hoping this weather will stick – snow could mean they have to pick the bikes back up. Two years ago, they had to pull the bikes back three different times.