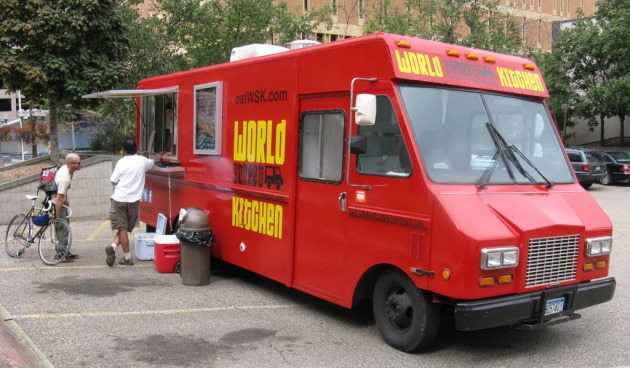 Street food lovers know World Street Kitchen, the food truck (pictured, above, in its weekday perch at NIcollet Mall and 5th Street in downtown Minneapolis). Or, for their sake, here’s hoping they do. In any event, WSK co-owners (and siblings) Sameh and Saed Wadi have some exciting news.

This isn’t one of those we’ve-been-dying-to-turn-our-truck-into-a-restaurant stories. “Actually, we were ready to open a restaurant before we opened the truck,” said Sameh Wadi. “We’ve been working on a bricks-and-mortar place for two years, but when the city opened up the truck licensing, we decided to jump on that first. We’ve been using it as out test kitchen.”

And no, the permanent restaurant — which is going to be located at 2743 Lyndale Av. S. in Minneapolis, in the retail portion of the new Greenleaf apartment building — isn’t going to replace the truck. Instead, the restaurant’s kitchen is going to supply its mobile unit.