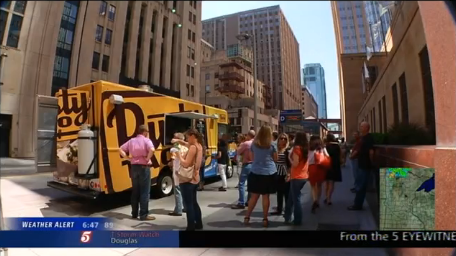 Food trucks are much more than a passing fad. The number of trucks seems to grow every day.

That’s posing a bit of a conflict between food truck operators and traditional restaurants in downtown Minneapolis.

A plan is in the works that ease tensions between the two sides. Dozens of food trucks now operate in the Twin Cities.

But no where is the competition more fierce than in downtown Minneapolis.

On Friday, at lunchtime we counted at least 20 trucks lining Marquette Avenue, and many satisfied customers.

But now there’s a plan in the works to spread out the food truck invasion to other parts of downtown.

Instead of all the trucks congested along Marquette, there are “food truck zones” being considered.

Possibly one in the Warehouse District and others elsewhere downtown.

Truck operators say they are open to the idea. Customers say they would enjoy more options, too.

The Minnesota Food Truck Association and the Downtown Food Committee, representing restaurants, are working together on the “food truck zones” in hopes of avoiding an all-out food fight.

The two groups hope to present a plan to the city council this fall.