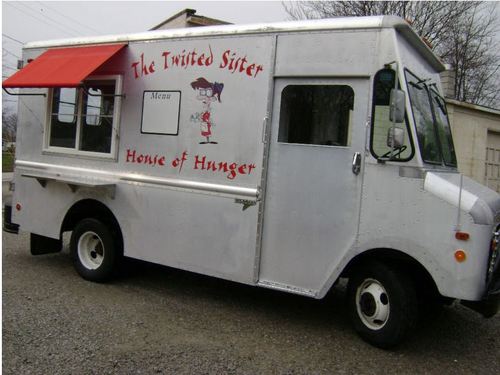 Food trucks fans will soon have another reason to get outside. Another new truck could be on the streets as soon as Friday. The Twisted Sister House of Hunger owner Wesley Kaake is putting the finishing touches on his truck and will be Downtown on July 1st if all goes according to plan.

Kaake started planning a Downtown doughnut shop in August of 2010, and during meetings with the city, the concept of a food truck kept coming up. Kaake initially wasn’t interested, but the growing attention to food trucks and issues with financing caused him to reconsidering. Locating a used food truck in Greenspring, Ohio, Kaake drove 18 hours to check it out and met Jody Shetzer. Shetzer operated a food truck business under The Twisted Sister House of Hunger name, and Kaake was pleased with the thought of having a spiritual partner in another state.

“We pretty much begged them to keep the name,” says Kaake. “We’re not part of a franchise or anything, but we said we’d always tell people there was another truck in Ohio. They’re kind of family friends now.”

The House of Hunger menu is focused on smoked meats, including smoked pork and bacon bites, smoked beef brisket bites and smoked pork tacos. It will also offer up desserts, somewhat of a rarity for Downtown food trucks. The sweet choices include a “chocolate addiction” cake froom Kaake’s mother’s recipe and frozen cheesecakes on a stick from local company Chubby Girl Cheesecake.

The House of Hunger held a preview event over the weekend, which Kaake says was a terrific success. The most popular menu item, he says, were the fresh-cut french fries, which are made on the spot.

But what about the doughnuts? Kaake says that he plans to return to the streets in the spring with a flatbed trailer equipped with a “doughnut robot” that can produce 45 dozen doughnuts per hour, which he plans to sell on the street weekday mornings. Until then, The Twisted Sister House of Hunger will be available for catering, and Kaake also plans to teach cooking classes during the off-season at the Midtown Global Market.