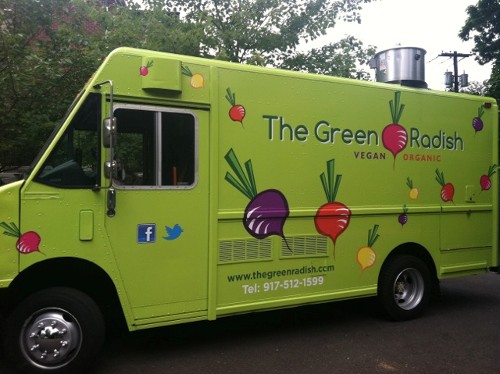 Look for a new food truck in Montclair.

James Rafferty of Glen Ridge is the chef/owner of The Green Radish, a vegan, organic food truck planning a first official stop in Montclair, Saturday, August 10, on Church Street at noon in the parking lot across from Starbucks.

Rafferty, a CIA graduate with over 20 years of experience as an executive and private NYC chef, wanted to share his passion for cooking delicious, fresh, healthy food and decided a food truck was the way to go.

Rafferty, who had been fascinated by food trucks, had the chance to work on The Cinnamon Snail, a vegan organic truck serving NYC and NJ. The experience sold him on the idea to start his own.

“I’ve been a vegetarian for years and it was hard cooking food that I wouldn’t eat myself and didn’t feel passionate about,” says Rafferty, who is excited to be one of the food trucks asked to participate in this year’s Montclair Jazz Festival and Brooklyn’s AfroPunk Fest. 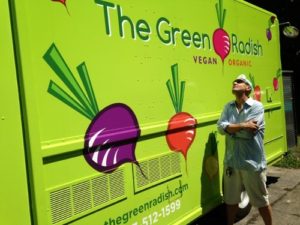 You don’t have to be vegan to enjoy The Green Radish. Rafferty says he strives to appeal to carnivores and vegans alike. One of his favorite Green Radish menu items is a “meaty” black bean burger with jalapeno, cilantro, chipotle mayo and melted onions.

“We’re not sprouts on a cracker. We offer nutritious, fast food that tastes really good.”