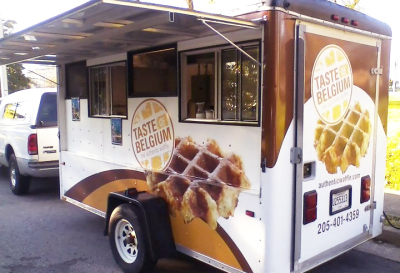 We on Bites have proven that we’re intensely interested in food trucks. And new ones pop up all the time. I recently heard about a promising new mobile food attraction: Liege-style Belgian waffles, which I wrote about in today’s Food Biz column that runs in the Nashville Post section of The City Paper.

Owner Tom Perkins grew up in a little town in Alabama, but he traveled the world in his first career as an an airline pilot. One of the places he frequently visited was Brussels, where he became a devotee of the waffle that is a popular all-day snack for Belgians.

They are nothing like Americans’ concept of a waffle, he says. The texture is completely different. There’s no need for syrup because the butter and sugar (a special coarse beet sugar that has to be imported from Belgium) combine to caramelize the exterior. While Perkins offers toppings — seasonal fruit, chocolate and/or whipped cream — he says the waffles are also great plain. Fresh, hot and wrapped in a paper sack, they’re fast and portable, the ultimate street snack.

Like many creative small businesses in Nashville, the waffle trailer called Taste of Belgium is a side business to supplement its owner’s career as a songwriter. But even if it’s only his second-favorite dream, Perkins is awfully passionate about these waffles.

Recalling his visits to Brussels: “I’d have a four-day layover and eat at least one waffle a day,” he says, laughing. “Then I’d take a few more with me for the crew to split in the galley.”

For a long time, Perkins couldn’t find the waffles in the U.S., and they’re still quite rare. Not only do they require imported sugar, but they must be made with special cast-iron waffle irons that weigh 30 pounds on each side.

A Belgian named Jean-François Flechet brought all the pieces together a few years ago with Taste of Belgium in Cincinnati. It became a big hit once Ohio folk realized this waffle is nothing like the syrup-drenched breakfast brick that Americans know.

Perkins met with Flechet and licensed the Taste of Belgium concept in Nashville. The special starter dough (not batter) comes frozen from Cincinnati, and Perkins wields the hefty cast-iron presses that are actually made in Cleveland, Tenn., to Belgian specifications.

On weekends, Perkins plans to take his trailer to the Nashville Farmers’ Market, where he’ll also source his local fruit. And he’ll be hitting different neighborhoods to spread the love. Find him on Facebook (Taste of Belgium-Nashville) to learn where he’ll be next. He also caters.