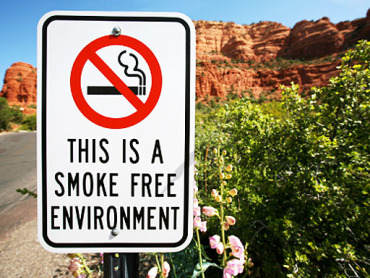 Smokers will soon be able light up in fewer places in the nation’s second-largest city.

Los Angeles is toughening its rules starting Tuesday, with a ban on smoking in outdoor dining areas that even includes areas near food trucks.

The prohibition makes Los Angeles the nation’s largest city with smoke-free al fresco dining and is believed to be one of few that includes mobile food vendors.

City officials on Thursday launched a public education campaign about the new law that was adopted in January 2010 with a one-year grace period to give business owners time to prepare.

Food tastes better “with a side of fresh air,” proclaim posters and radio announcements to be used in the campaign.

“We will be putting out cigarettes all over Los Angeles, and that’s a beautiful thing,” said Kathy Magliato, president of the American Heart Association.

Tobacco-toking is already prohibited at city beaches, farmers markets and parks, as well as within 25 feet of playgrounds, bleachers, sports fields and picnic areas.

Now it also will be off-limits within 10 feet of outdoor dining areas or within 40 feet of a food truck. Bars, clubs and private events at restaurants will be exempt.

The ordinance will be largely self-regulatory, said Councilman Tom LaBonge. Businesses will be required to post signs and request that patrons extinguish their cigarettes or face fines up to $500 for the smoker and the business.

“We can clean up the city, as well,” LaBonge said. “How many butts go down the drains and onto our beaches?”

The new restriction has many restaurateurs fuming, particularly those who installed sidewalk tables and patios to accommodate smokers, said Daniel Conway, spokesman for the California Restaurant Association.

“This is something that was kind of being self-regulated,” Conway said. “If you’re losing customers over smoking, you’re going to do something about it.”

It seems, however, that the movement to stuff out smoking in al fresco dining areas is growing. A number of cities surrounding Los Angeles have similar bans, including Beverly Hills and Santa Monica. Starbucks last year barred smoking in the patio areas of its California coffee shops.

The ESPN Zone restaurant in downtown Los Angeles has had an outdoor smoking ban since it opened two years ago, and customers appreciate it, marketing manager Tim Whiteman said.

Advocates for the rights of smokers say outdoor bans particularly aggravate them because there’s little evidence about the effects of secondhand smoke in fresh air since the vast majority of studies were conducted in confined environments.

“Sitting outside in L.A., the cars and smog are going to kill you faster than secondhand smoke,” noted Robert Best, western regional director of Citizens Freedom Alliance, a smokers rights organization.

When smoking is restricted, studies show, the incidence of smoking-related disease in that area plunges anywhere from 6 to 47 percent, she said.

Longtime smoker Bonnetta Davis said the ban would affect the restaurants where she goes.

“In a closed environment, I can understand, but come on, this is outdoors, in the air,” she said. “It’s discriminatory.”