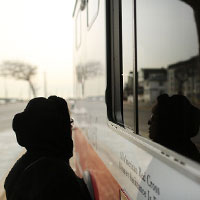 Nope, these were children, agonizing over whether to pick the ham-and- cheese or the peanut butter-and-jelly sandwiches, the regular or chocolate milk.

It was part of a summer meals program that tries to make sure the children who qualify for free or reduced-price meals during the academic year don’t lose out just because school’s out.

New York City’s Department of Education put its first truck in service a couple of years ago, and this year it has four — one that goes to Orchard Beach in the Bronx and three that go to a park and two library branches in Queens.

“By bringing the food to them we’re able to extend our reach in ways that previously were unattainable,” said Eric Goldstein, CEO of the department’s Office of School Support Services.

There’s no paperwork in the summer. But while participation in the summer meals program is on the rise, with 7.6 million meals served in summer 2013, up from 7.1 million in 2012, it’s still lower than when school is in session.

That mirrors what’s seen around the country, where only a small portion of the 21 million children who get meals during the school year have access to them in the summer when it can be more of a logistical challenge for parents to get kids to food sites.

Other places around the country have started using mobile delivery systems for their summer meals programs. In Baltimore, a summer meals program drops meals off at 11 sites, while in Waco, Texas, school buses go to certain designated sites and kids get on the bus to get their meals. In Florida’s Palm Beach County, a church uses a retrofitted school bus to deliver meals to kids at three apartment complexes.

However, New York City was one of the first to offer mobile deliveries and “most probably resembles a traditional food truck, perhaps more than almost anybody in the country,” said Josh Wachs, chief strategy officer for the organization Share Our Strength. The organization’s No Kid Hungry program helped the city get trucks for its mobile food offerings.

The trucks are white with bright colors. They’re decorated with text that promotes the free meals, and a number people can text to find the food service location closest to them. Something that is conspicuously missing is any reference to the idea that this of part of any anti-hunger program aimed at low-income residents.

That’s on purpose, Wachs said. “Having a food truck-style vehicle makes it fun for kids, and reduces the stigma often associated with free meals that has limited participation,” he said.

And Goldstein said that so far this summer, 65,000 more meals have been served via the trucks than at the same point last year.

Many of those have been at the truck outside the Queens Public Library branch on Main Street in the Flushing section of the borough, which had served more than 84,000 meals as of last week.

They were eaten by people like 10-year-old Azwa Sadat and her 6 ½-year-old sister, Zoya, who come by the truck a couple of times a week with their mother, Ifath, on their way to the library.

They both had chocolate milk and peanut butter and jelly sandwiches, and said they liked coming to the library even more because they knew the truck would be there.

Ying Li passed by the truck with her 5-year-old daughter, Sherry. “It’s very convenient,” she said, as the two went on their way to get her 7-year-old son from summer day camp.

Of course, kids being kids, it wasn’t going to be perfect, as Sherry held onto her milk but seemed reluctant to eat her sandwich.

“She doesn’t really like the bread,” Li said with a laugh.