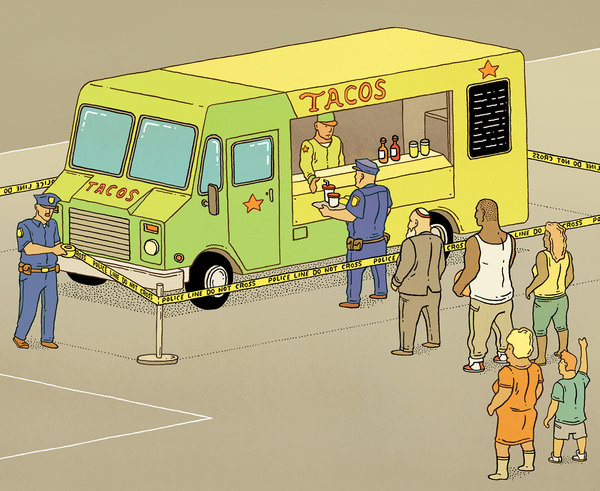 Stefan Nafziger seemed oddly downbeat for a guy watching a dozen or so hungry people line up to buy his falafels. Three years ago, when it seemed as if food trucks might take over Manhattan, he planned to have a fleet of his Taim trucks dispensing Middle Eastern fare throughout the city. He even got a Wall Street investor. Now, he says, his one truck barely justifies the cost.

I was originally hoping that Nafziger would help me figure out a decidedly New York puzzle. As I was walking through Prospect Park recently, I wanted to find a healthful snack for my son and something for me. The only options, though, were the same sort of carts that my dad took me to in the ’70s: Good Humor ice cream, overpriced cans of soda and overboiled hot dogs sitting in cloudy water. This seemed ridiculous. In the past few decades, food in New York City has gone through a complete transformation, but the street-vendor market, which should be more nimble, barely budges. Shouldn’t there be four Wafels & Dinges trucks for every hot-dog cart?

David Weber, president of the New York City Food Truck Association, explained that the ratio is more like 25 to 1 the other way. That’s because despite the inherent attractiveness of cute trucks and clever food options, the business stinks. There are numerous (and sometimes conflicting) regulations required by the departments of Health, Sanitation, Transportation and Consumer Affairs. These rules are enforced, with varying consistency, by the New York Police Department. As a result, according to City Councilman Dan Garodnick, it’s nearly impossible (even if you fill out the right paperwork) to operate a truck without breaking some law. Trucks can’t sell food if they’re parked in a metered space . . . or if they’re within 200 feet of a school . . . or within 500 feet of a public market . . . and so on.

Enforcement is erratic. Trucks in Chelsea are rarely bothered, Nafziger said. In Midtown South, where I work and can attest to the desperate need for more lunch options, the N.Y.P.D. has a dedicated team of vendor-busting cops. “One month, we get no tickets,” Thomas DeGeest, the founder of Wafels & Dinges, a popular mobile-food businesses that sells waffles and things, told me. “The next month, we get tickets every day.” DeGeest had two trucks and five carts when he decided he couldn’t keep investing in a business that was so vulnerable to overzealous cops or city bureaucracy. Instead, DeGeest reluctantly decided to open a regular old stationary restaurant.

Nafziger also knows well the regulatory hassles of the business. After one of his employees spent eight hours in jail for selling falafel without a license, he strictly follows the rule insisting that every mobile-food employee has Health Department certification. The trouble is that he needs to employ four people, each with his own license; if one quits, it can take two months for a new worker to get the proper paperwork. Nafziger said he holds on to his truck only because it’s basically a moving billboard for his two, more successful brick-and-mortar restaurants, in Greenwich Village and NoLIta. And stationary restaurants, by the way, require that only a single employee on duty have a Health Department certification.

Nafziger and DeGeest may have become experts in the rules and regulations, but many of the city’s vendors are constantly flummoxed. I spent one recent morning in the offices of the Street Vendor Project, a worker-advocacy group. As I sat with Sean Basinski, the group’s founder, a stream of vendors came in with pink tickets in their hands. One woman, an Ecuadorean immigrant who sells kebabs in Bushwick, Brooklyn, handed Basinski the six tickets that she and her husband received on a single afternoon. The total came to $2,850, which, she said, was much more than what she makes in a good week. She had a street-vendor’s license, she said, but didn’t understand that she also needed a separate permit for her cart.

The food-truck business, I realized, is a classic case of bureaucratic inertia. The city has a right to weigh the interests of food-market owners (who don’t want food trucks blocking their windows) and diners (who deserve to know that their street meat is edible, and harmless). But many of the rules governing location were written decades ago. In the ’80s, the city capped the number of carts and trucks at 3,000 (plus 1,000 more from April to October). Technically, a permit for a food cart or truck is not transferable, but Andrew Rigie, executive director of the N.Y.C. Hospitality Alliance, said that vendors regularly pay permit holders something like $15,000 to $20,000 to lease their certificates for two years. Legally, the permit holder becomes a junior partner in the new business.

As Rigie spoke, I was reminded of corrupt countries that I’ve visited, like Iraq and Haiti, where illogical and arbitrarily enforced rules create the wrong set of incentives. Perhaps the biggest winner in our current system is an obscure type of business known as an authorized commissary. By city law, every food cart and truck must visit a licensed commissary each day, where a set of mandated cleaning services can be performed. These commissaries also sell and rent carts and sell vendors food, soda, ice cream and propane. Rigie told me that many commissary owners make a bit extra by acting as informal brokers, facilitating the not-quite-legal trade of permits, which, by some estimates, is a $15 million-a-year business. Given their city-mandated stream of business, these commissaries have essentially formed an oligopoly. As a result, they have little incentive to compete aggressively by offering different kinds of food. No wonder we have an oversupply of hot dogs and knishes and nowhere near enough waffles and falafels.

Economically speaking, the problem is a standard one, known as the J-curve, which represents a downslope on a graph followed by a steep rise. Some sensible changes to the current food-vendor system may have long-term benefits for everyone, but the immediate impact could spell short-term losses for those who now profit from the system. A small group of New Yorkers — particularly owners of commissaries and physical restaurants — are highly motivated to lobby politicians not to change things. And most of the potential beneficiaries don’t realize they’re missing out. Many of the rest of us would love to have more varied food trucks, but we don’t care enough to pressure the City Council.

The one group that clearly suffers from the current system — the ticketed vendors — are often poorly paid immigrants without legal status and virtually no power. This sort of dynamic more or less sums up the economies of the third world. Economists generally agree that one of the distinguishing factors between rich countries and poor ones is that it is much easier to start businesses in rich countries. In Ecuador, for example, it takes about 56 days and 13 separate procedures to get all the legal paperwork done to start a new business. In the United States, it’s an average of six days and six procedures. But if you want to open a mobile-food business in New York, it’s essentially like starting a business in Ecuador — and that’s if you can somehow arrange a permit.

After I left Prospect Park, I went home and began to read about Portland, Ore. The city embraced food-truck and cart culture and has made the procedure for starting a business remarkably easy. I found a Web site listing the carts and trucks operating there: Caribbean, Cajun, Central American, creperie, Cambodian, Cuban, Czech. And that’s just the C’s.