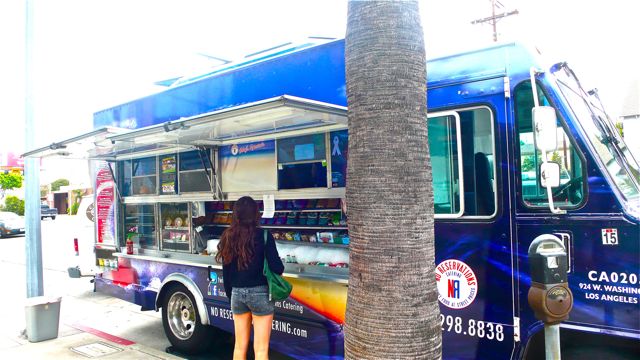 I was absolutely starving as I logged on to Twitter yesterday to find a food truck we at ILoveFoodTrucks.com hadn’t reviewed yet.  I grabbed my brother, a food lover in his own right, and we jumped into the car headed straight towards Olympic Blvd.  I can’t lie and say that the No Reservations food truck didn’t catch my eye due to it’s identical title with Anthony Bourdain’s fabulous Travel Channel show.  Driving down Olympic, we spotted not one, not two.. but FIVE food trucks parked along the street.  Although it was a tough call deciding between which truck to try, we stuck to our guns and went to the No Reservations truck purely because of it’s name.

After a quick glimpse at the menu, I was a little bit caught off guard to see that they only offer six choices – all of them being wraps.  Wraps aren’t exactly my favorite food, I think that they’re an excuse to pile a bunch of flavors together and wrap them tightly into a tortilla. If you ask me, tortillas are for tacos and that’s about it.  Nonetheless, we were greeted by a very friendly woman by the name of Leslie.