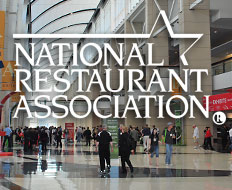 The full-service restaurant industry will account for almost $195 billion in sales this year, while quick service will account for nearly $168 billion—real growth of 0.9 percent—according to the NRA’s projections.

Hudson Riehle, senior vice president of the Research and Knowledge Group for the NRA, says the restaurant industry now accounts for 49 percent share of the total food dollar in the U.S., up from 25 percent in 1955.

“The restaurant industry has truly become an economic juggernaut within the U.S.,” he says, noting that the industry will grow to about 12.8 million employees this year, the second-largest private-sector employer in the nation.

“When you look at what’s gone on with real disposable personal income growth, we’re looking to have real gains in the 3 percent range—substantial improvement over the past several years’ performance,” he says.

“It still indicates that consumers are anxious, related to what’s gone on with employment,” he says. “Once employment picks up, confidence will pick up.

“In terms of [consumer] perception, their situation still is not as solid as it was several years ago. Consequently, from a restaurant industry perspective, that value emphasis will continue this year and beyond.”

The mobile food movement will also continue to gain steam in 2011, Riehle says.

“We asked adults how likely they would be to order from their favorite restaurant’s menu at a mobile kitchen parked near their home and work place,” he says. “Almost one out of two [people] 54 [years old] and younger reported they would be likely to use it.

“The industry has always been about points of access, so this would definitely become an important avenue of growth, and additional point of access, from the consumer perspective, in the years ahead.”

To read about the NRA’s expected menu trends for 2011, click here.