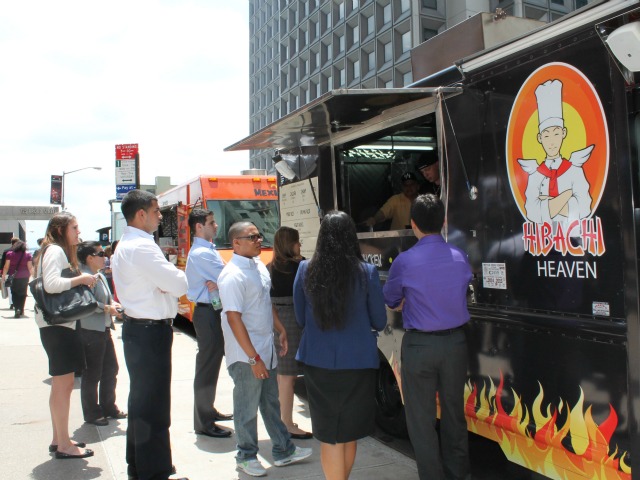 FINANCIAL DISTRICT — Hibachi has never looked quite like this.

A food truck claiming to offer New York’s first traditional Japanese grill launched in the Financial District Thursday — without any of the leaping flames or dazzling knife tricks most people associate with hibachi.

But it still drew a large crowd.

Dozens of people at a time lined up at Broad and Water streets to try the steaming platters of freshly grilled chicken, shrimp, vegetables and rice that are the signature dish at Hibachi Heaven, a new food truck emblazoned with yellow flames.

The truck’s inaugural patrons said they were drawn to the buzz that accompanies any new dining option Downtown, along with the promise of hibachi food.

Some were a bit surprised to see that, rather than the theatrics they had expected, the cooks that bent over the flat metal grill at Hibachi Heaven were much too busy to attempt any tricks.

“That’s a bit of a stretch,” said Brian Schwartz, 25, who lives in the Financial District, of the “hibachi” name. But he added that he still wanted to try the truck’s food.

A spokeswoman for Hibachi Heaven said that any Japanese food cooked on a grill earns the title of “hibachi,” even if it is not prepared dramatically.

Melanie Barry, 34, a Queens resident who works on Wall Street, said she cared more about the final product than how the food was cooked.

“Hibachi definitely has a certain taste,” Barry said. “I’m curious if it’s going to taste like I went to a hibachi restaurant.”

Susi Sur, a Midtown West resident who works near the food truck, agreed.

“It is hibachi, just without the entertainment,” she said.

The idea for the food truck came from Nick Russo, 31, a Brooklyn resident who has worked in Japanese restaurants.

He hired a chef with experience in the Benihana chain, which defined the American idea of dramatic hibachi-style cooking, where chefs dazzle diners as they chop and sauté the ingredients.

Hibachi Heaven’s menu is simple. Customers can choose either a bowl or a wrap, with beef, chicken, shrimp or tofu and fried or brown rice.

All dishes are topped with vegetables and a choice of ginger sauce, wasabi-infused mayonnaise or “Yum Yum Sauce,” which is made from mayonnaise, spices and sugar. The entrees range from $7 to $9.

Hibachi Heaven plans to operate five days a week with stops all across Midtown and Lower Manhattan. For a complete schedule, visit the food truck’s website and Twitter page.