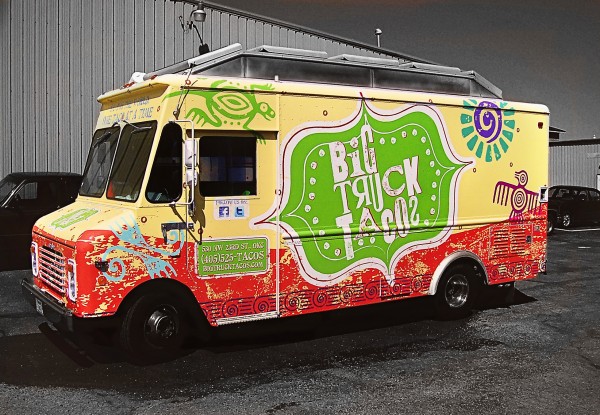 OKLAHOMA CITY – With vendors and food lovers referring to the heavy-handed sweep of an outdoor food event in MidTown Oklahoma City as being like a “SWAT team” raid, The Oklahoman has followed up on their earlier story by showing how sloppy, obnoxious and unapologetic Oklahoma’s ABLE Commission is.

Like a Sovietized Gestapo sweeping out of the blue, guns at the ready, to shut down a family-fun event, ABLE, along with the Oklahoma City/County Health Department and Oklahoma City code enforcement agents and more, proved to moms and dads with kids in strollers just how tough they are by ruining everybody’s fun.

Yeah, food trucks like the one operated by the popular Big Truck Tacos, need to be shut down because “it didn’t have the right license posted,” according to The Oklahoman.

Another truck didn’t have “proper screening,” and another had “no working electricity or refrigeration.” While that last one is troubling, no health complaint citations were issued.

One business owner, Jonathan Stranger of Ludivine, put it perfectly in Steve Lackmeyer’s Oklahoman story, out today: “There were things done wrong (by event organizers), but the show of force was insane … this was a shakedown.”

Another person, Brian Bates, told The Oklahoman that “I found the sheer number of authorities and their overall demeanor to be adversarial and counterproductive.”

Bates continued, saying, “The entire ordeal seemed to be in sharp contrast to city leaders public stance of progress, cooperation with local businesses and forward thinking.”

Indeed. Oklahoma City has come a long way in the past five years and now, with exciting new businesses opening up all the time, “the authorities” who are trying to justify their jobs that includes a badge and a gun and a bad attitude, people will avoid the event.

We are seeing that in Tulsa with ABLE behind raids up there of legitimate watering holes. It’s ridiculous.

And ABLE always seems to be involved in these hamfisted, bumbling raids, as we noted in our Red Dirt Report story posted Monday.

And while the Health Department admitted to The Oklahoman that things could have been handled differently, ABLE, who had three agents, said an agent complained and notified his bosses after seeing an Oklahoman story promoting the H&8th block party.

Said ABLE spokesman Jim Hughes: “(T)hey were not sure the caterer had a mixed-beverage license.”

As noted in Lackmeyer’s story: “Hughes said a surprise visit is the only way to ensure liquor sales are being handled properly and that he doesn’t have the manpower to communicate in advance.”

One of these guys at ABLE can’t pick up a phone over their lunch break and doublecheck with a vendor? Don’t have the manpower? Are they kidding? What in the blazes are they doing over there at the ABLE Commission?

And they admit they are monitoring news stories and “Facebook,” as noted by Hughes. The message here is: Big Brother is watching and they can make or break you. They can give you a license or squash you like a bug. It is the out-of-control government agencies that decide if you have fun or not.

Do you have a license? A screen? A this or a that? Only government can decide. You are simply a slave in the eyes of Big Brother and the ever-expanding Nanny State.

We hope Gov. Mary Fallin calls for a thorough investigation of the increasingly unpopular ABLE Commission.