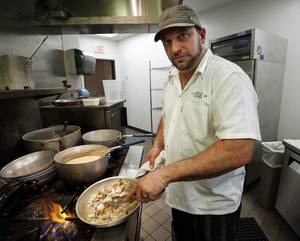 A year ago, I posted a list of things I looked forward to and hoped to see in the Oklahoma City food scene in 2012 food scene. So now it’s time to review.

First up was the opening of Local, which turned out to be one of the coolest things that happened in 2012. Chef Ryan Parrott left the kitchen at Iguana Mexican Grill to help open this ambitious Norman concept with sisters Melissa Scaramucci, Heather Steele and Abby Clark. The fledgling restaurant has endured typical growing pains and Normancentric growing pains, but the future looks bright for this farm-to-form restaurant that features a seasonal menu, lots of square-footage, an area just for kids and an approachable, affordable menu.

Staying in Norman, there was the arrival of the Austin, Texas-based chain Chuy’s Tex-Mex Cafe. The place has been a resounding success, and units for Oklahoma City proper and Edmond can’t be far behind. When this growth occurs, current Tex-Mex purveyors will be on notice to elevate or be eliminated.

I wrote that I wished to see the locavore movement spread beyond the true believers: Thanks to the foundation of champions for local and the Whole Foods effect, more people are using local than they have since they had no other choice. That’s refreshing. The next step is for our local producers to fortify distribution. Currently, we have the Oklahoma Food Cooperative and a string of county-by-county farmers markets, which have served us well. Growth and cooperation will make things even better for both vendor and customer.

I was also hoping street food growth would expand, and it has. Once upon a time, Bobo’s Chicken and a fleet of nearly anonymous taco trucks south of downtown were your best options for late-night street food. The H&8th get-togethers during warm months have succeeded in developing demand for an organized effort to gather and sup after hours. Waffle Champion has been so successful that a bricks-and-mortar location is now in the works. Heo’s Kitchen andTaste of Soul Egg Roll have fortified the work of Big Truck Tacos. So, there’s a little growth, but I would love to see even more.

Next up was a proclamation that this would be the year I cooked a whole hog in a pit. #fail. #trytryagain.

Speaking of #fail, I promised to drop a few pounds. #trytryagain.

Continued improvement in school menus was another wish for 2012. The jury is still out on this one, but I know things are moving in the right direction. I plan to spend the early part of 2013 taking a look at the progress that’s occurred since Edmond schools set the standard with help from chef Dave Fouts.

On top of that wish, I hoped for better education at home about food. Take a second to shoot me an email to detail what you did in the last year to better educate yourself and your family about the foods you eat.

I continue to hope for our local Slow Foods community to grow. God bless Kerry Norman andKamala Gamble for organizing our effort to share the gospel of local artisanal and organic food producers. If you’re reading this column, you should be a member of this group. And you should invite at least five friends to join you. Do it at www.slowfoodokc.com.

Finally, I hoped to drink more Amarone and that’s been a #fail as has my effort to help Oklahoma develop a signature flavor. I’ll keep after those goals and a lot more in 2013. If you’d like to find out what my hopes and wishes for 2013 are, be sure to find my column in the Mood section of Thursday’s editions of The Oklahoman.