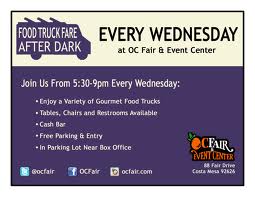 Although it was cloudy and there were puddles covering parts of the streets and sidewalk, there was still a crowd waiting in line for the food trucks. They were all patiently waiting to buy something they would enjoy from each truck.

There were five trucks in total and each provided a menu of unique and delicious food. The trucks that showed at the fairgrounds were the O.C. Food Truck, Baconmania, Oh For Sweets Sake, SlapFish, and Piaggio.

Food trucks make all of their food on the go and sell it straight from the truck. The point of a truck that serves food is to make its menu accessible to people that might not have time to sit down in a restaurant or who just want to be spontaneous.

The food truck, Oh For Sweets Sake, was started by a former Saddleback College student. Her name is Lisa Johnson, and she received her culinary degree at Saddleback.

She has not yet visited the campus with her truck, even though her food was described as delicious by some of her customers.

Johnson’s truck had a wide variety of cupcakes, every one a different flavor and style. She also has other food on the menu, but the other options weren’t available at the fairgrounds that day.

The next truck, Slapfish, was serving up only seafood, with one of the options on the menu called the “Lobsticle.”

“We started about five months ago, our focus is sustainable fresh seafood,” said Andrew Gruel, the owner of Slapfish. “We consider ourselves a modern seafood shack on wheels.”

As for the name of the truck, Gruel said, “We love onomatopoeia. So in a way it’s memorable.”

“I came with friends, they told me to come. I heard that the food was really good, so I don’t know too much about it but I’m here to try it,” said Tracy Botero, who was standing in line for the Argentinean food truck, Piaggio. “I ordered the empanadas, so I’m going to give that a whirl. “

Food trucks aren’t a relatively new concept, but they might as well be with the popularity they have gained over the years.

While some might consider food trucks a fleeting fad, the reality is, why would anyone stand in the cold waiting in line for a mere fad? Food trucks are far more than that and inspire people to chase what they want.

Food trucks can be found all over the Orange and Los Angeles Counties, so don’t hesitate to try the food truck experience.