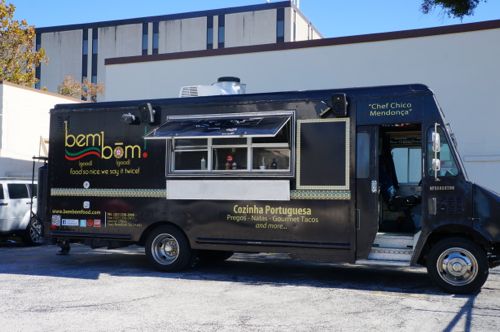 Food Network’s “Eat St.” will be in the area for several days beginning Friday to film some of our food trucks. The first to be featured is Bem Bom, the Portuguese food truck with chef Francisco “Chico” Mendonca behind the wheel and in front of the stove. I hopped on board the other day to discuss the shoot with Mendonca and to sample some of the specialities he plans to cook at Friday’s shoot.

Mendonca, who grew up in the Azores of Portugal, has had the truck for two years. Prior to that he was the chef at the nonmoving Cocina 214 in Winter Park, and before that he worked in the actual 214 area code — Dallas — at Clair de Lune and Voltaire. He says he prefers cooking in the food truck to cooking in a conventional restaurant. “I like the freedom,” he told me.

Bem Bom (long O on the Bom) means good good in Portuguese, a response to the question “how does it taste?” After sampling some of the food from this truck, I think the name should be adjusted a bit. What’s the Portuguese word for crazy? Because my response to everything I ate was, “This is crazy good good.”

The reason that everything is so delicious is because of the painstaking care Mendonca takes in preparing the food to order. Sometimes people mistakenly equate food trucks with fast food. That may be true for some trucks, but you’d better be ready to idle your engine a bit when you order from Bem Bom. Trust me, it’s going to be worth the wait.

I especially liked the Running Duck Taco that Mendonca assembled for me. He confits his own duck legs then sautes the meat and crisps the skin on the truck’s griddle. He puts the meat into the thick, double tortilla and tops it with ginger, basil and his house slaw (truck slaw?). Then he chops up the duck skin so that it’s sort of like a crackling topping and sprinkles that on top of the taco. He finishes it off with orange dust, something he makes himself by roasting orange peels and then grinding them into a powder. That little touch made for a wonderfully smoky citrus note.

Chicken Piri-Piri made use of the Portuguese piri-piri sauce, whose name means pepper-pepper, so you get an idea of the spiciness. Mendonca marinates the chicken in the sauce and also uses it as a finishing touch. Some melted island cheese, fresh cilantro and sliced radish (Mendonca uses a lot of radishes) and you’ve got a spicy but surprisingly fresh tasting sandwich.

The lamb burger is available for people who want something meatier. Burgers are almost expected at some of the gourmet trucks, but this is the only one that Bem Bom offers. But it’s a good one, in no small part because Mendonca grinds the meat when ordered. The grass-fed lamb is mixed with spices, including mint, topped with tomato jam, piri-piri and an apple-ginger barbecue sauce and served on a special Portuguese roll that Mendonca says he drives four hours to buy.

You can taste all this yourself — and maybe get yourself on the tv, too — when Bem Bom goes for its closeup Friday. The taping will be in the parking lot of Southeast Steel, 63 W. Amelia St., Orlando, from 11 a.m. to 2 p.m.

If you miss that taping, Eat St. will also be at East End Market on Saturday at noon with Sushi & Seoul on the Roll (formerly Fish Out of Water). Flog favorite Swede Dish will be the focus at noon on Sunday at Eat More Produce, 1111 S. Orlando Ave., Winter Park. Treehouse Truck is the Monday truck, at Golf Channel, 7580 Golf Channel Drive, Orlando, also noon.

Cafe Rouge Express will serve its English-inspired food on Tuesday, Jan. 14, at the First United Methodist Church of Orlando, 142 E. Jackson St., and filming will conclude on Wednesday at the offices of Orlando Weekly, 1505 E. Colonial Drive, Orlando, with Curbside Chef. Those are also at noon.