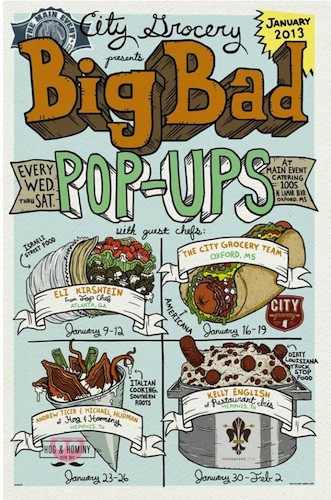 The event comes courtesy John Currence, who owns Oxford’s celebrated City Grocery as well as Bouré, Big Bad Breakfast, Snack Bar, and the Main Event catering company. City Grocery is undergoing renovations during the month of January, so, says City Grocery’s chef de cuisine Jesse Houston, “We wanted to make sure the staff kept busy, involve our friends, and have fun with it too.”

Kirshstein will serve up Israeli street food. The folks from City Grocery are doing Americana staples like hamburgers and hot dogs. Ticer and Hudman will bring their unique Hog & Hominy-style of Italian-meets-Southern fare to Oxford, while English’s take will be Louisiana-style truck-stop food.

“It’s going to be fun for us fancy chefs to do food we wouldn’t normally do,” says English, who’s planning on serving boudin hot dogs and chicken red beans and rice, among other fare. “It’s really filthy food, just filthy,” he says. “I mean that in the most positive way.”