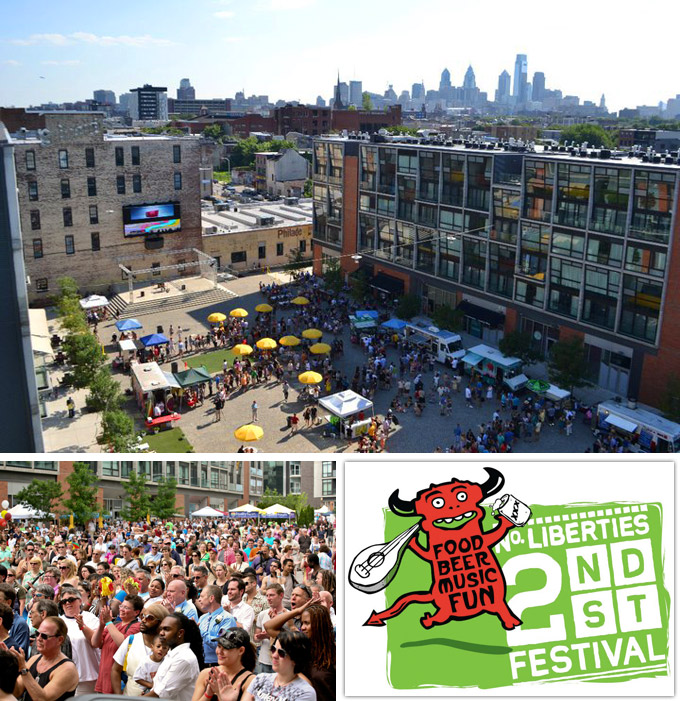 The neighborhood is closing off N. 2nd Street between Germantown and Fairmount for a (free!) supersized block party filled with six blocks of beer gardens, workshops, art, food, music and other merchandise vendors.

Check out our guide to all of the above, so you’ll be fully prepared for festival enjoyment:

• Four stages: Fairmount, Poplar, George and Piazza. This year, the festival has teamed up with the Philadelphia Folk Festival. There will be three all-day stages at 2nd street intersections with Poplar, George and Fairmount, sponsored by Jose Cuervo, plus an additional stage at the Piazza, programmed in partnership with the Electric Factory.

• The lineup: The 2nd street stages’ music is programmed by the Philadelphia Folksong Society, which is celebrating the 50th year of their annual Folk Festival, coming next month. The performer list is brimming with everything from authentic roots to cult favorites, from traditional folk to hip hop, indie and R&B. Check out the full list, and a schedule, here.

It is the summer of the beer garden, after all. Seven local establishments will be setting up temporary beer gardens on 2nd Street as it’s closed down to vehicular traffic for the day: Bar Ferdinand, Standard Tap, Cantina Dos Segundos, El Camino Real, The Foodery, North Bowl, Kings Oak, Darling’s Diner and Gunners Run.

Beer available will include local favorites Yards and Stout. Pickle-back shots will also be available again this year.

We’ve got all the details on food, kids’ activities and more, below.

The aforementioned beer garden participants will be dishing up delicious eats in addition to drinks. Some highlights:

• El Camino and Bar Ferdinand: These two are sharing a tent, and will debut a brand new dish, the Seitan Hotlink. That’s in addition to regular footlong Hotlinks, BBQ pork sandwich, Chili Verde Taco, Grilled Corn, Pork Sandwich, Churros and a Deep-fried Snickers Bar, all for $5.

• Cantina Dos Segundos: For some Latino flavor, go for the Cantina’s tacos, tamales and margaritas.

• Rustica Philly: What else? Pizza.

• Food trucks: Sweet Box food truck and Gigi and Big R’s, Philadelphia Vendy awards winners for Best Dessert and the Philly Vendy Cup, respectively, will also be in attendance. Another food truck dishing up street eats will be Dapper Dog.

Local vendors will line 2nd street with booths selling their wares, from boutiques like Art Star and Arcadia, plus Anna Beau Designs.

The stage at Fairmount will feature kid’s performances and workshops with Cat’s Pajamas, Philly School of Rock, Krista Parrish and Electric Man. There will be a special puppet- and mask-making workshop with Ramshackle Enterprises, who will lead a 2nd street parade with puppeteers and musicians The Great Unknown and Mason Porter, part of the Philly Folk Parade collective.

Last year’s festival drew 8,000 and this year’s promises to be even more of a whopping success!