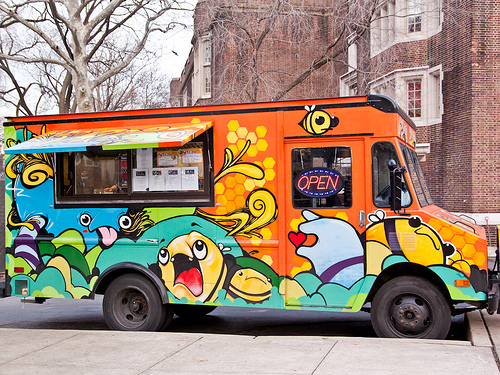 When someone first suggested I go to Tyson Bees food truck for some Korean tacos, I was really confused. The first thing I think of when someone says the name Tyson is usually Mike… or the chicken company. After purging my brain of the idea of Mike Tyson taking my order, handcrafting Korean tacos, and then taking a bite out of my ear… I did some research on this truck. As it turns out, a former Iron Chef contestant by the name of Tyson Wong Ophaso decided to try his hand at a food truck based on Asian-fusion. Korean-Vietnamese-Mexican flavors. Can’t get more serious than that. I mean… the flavor combinations can definitely work together (bulgogi cheesesteak anyone?), but it’s also been screwed up a lot. Color me skeptical. First things first… their truck. It is baller as fuck (hey that rhymes!). I’m not entirely sure where Tyson came up with the whole bee theme, but whatever. It’s his truck. He can do whatever he wants with it. If I made a truck, it would be plastered with action shots of Kevin Durant and Godzilla. It would also be awesome, but that’s not the point. The point is, when all the other trucks go rolling around the Penn campus looking all crappy and the like, Tyson is ridin’ dirty in his flamboyantly fluorescent truck plastered with cute bees and hearts. Also, that blue thing looks like it’s licking someone’s butt. Like a boss. I actually did not get tacos. Korean tacos has gotten so played out over the past few months that it’s not even fresh anymore. Everyone and their grandmother is in the Korean taco game. Instead, I tried their “Grilled BBQ Lemongrass Pork Banh Mi.” At $5, it’s more expensive than most of the banh mi you could get in Manhattan’s Chinatown, but goddamn was it tasty. Sweet bbq pork is accented with the crisp flavor of cilantro and just a hint of lemongrass. My only gripe would be that they give you too much pork and not enough bun since the bread kind of falls apart. Seriously though, that’s not much of a complaint… I would never tell a food truck to give me less meat. That’s just stupid. I also got a Korean kalbi and kimchi burrito, because my ass… it is not fat enough yet. Yeah I took a bite of it to take a picture, what of it? Anyway, it is what it is. It is stuffed with marinated beef short ribs (and yes, they are juicy and flavorful), kimchi, lettuce, and rice. Super simple construction, but the final product definitely surpasses the sum of its parts. Not too spicy, which was somewhat disappointing, but pungent indeed. Also costing $5, I would get it again. At first I thought it was a tad expensive for the size, since I was left wanting, but I realized that somethings are worth the price. This is one of those things.