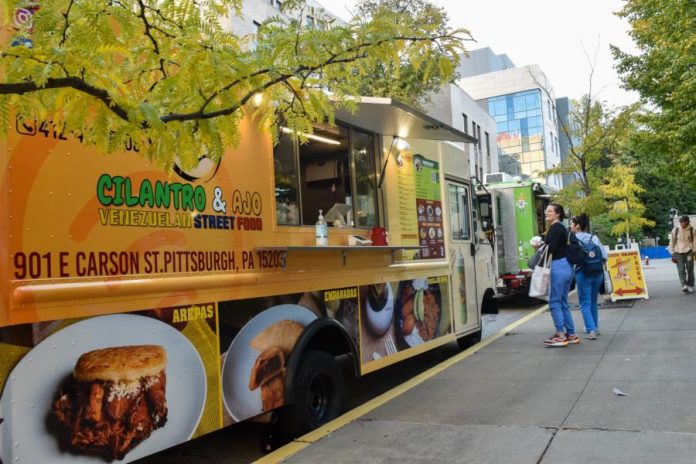 Students and faculty in the health science schools enjoyed a variety of Latin American and Hispanic food trucks accompanied by lively music and enthusiastic crowds in a celebration of Latinx and Hispanic Heritage Month on Monday.

Paula Davis, the associate vice chancellor for diversity, equity, and inclusion for the Schools of Health Sciences, was one of the architects of the event. She said she saw the event as an opportunity for the diverse classes to mingle.

“It’s a way of celebration and to bring folks out to mingle a little bit before they hit home for the day,”  Davis said. “We’re happy to do anything that we can by way of raising visibility and giving everyone an opportunity to shine according to the recognition of their culture, however that is written.”

From the tender and flavorful meats in their best-selling Pabellon bowl to the warm crisp shell of an empanada, Cilantro y Ajo’s menu caters a greater appreciation and awareness for Venezuelan culture.

Parra and her husband Anthony have been running the shop in South Side for the last four years. Parra said they moved to Pittsburgh from Isla Margarita Venezuela almost eight years ago and had their eyes set on opening a restaurant since they stepped foot in the City.

“When we came here it was already a decision to save enough money to open a place here,” Parra said.

Parra said the couple owned a restaurant back home and wanted to bring their culinary expertise to Pittsburgh. Their love for their culture and the mere lack of diverse cuisine in the City drove the husband-wife duo to open Cilantro y Ajo, she said. Eight months after opening their South Side location, they added a food truck.

“It was really hard to find Latin food in general,” Parra said.

Parra said for her and her husband, Cilantro y Ajo celebrates Latinx and Hispanic Heritage month every day.

“To be here and go to work every day is a celebration for us because we have the chance to share our food, our tradition, roots, and celebrate our country,” Parra said. “[Food] is the way to keep your identity. To keep your traditions and be open to sharing that is a blast.”

Dan Bartow, the owner and operator of Cool Beans Taco Truck, hails not from 2,500 miles away, but a mere five miles. Bartow, a New York native, opened his food truck eight years ago. People can spot Bartow’s bright green whimsical truck in many points in Pittsburgh, such as CMU, Millvale and Pitt.

Bartow said he has been in the restaurant industry for a number of years and is most famously the chef behind Legends Eatery in North Side. But after seeing the shift in trend to easier-to-eat and more robust flavors, the former Italian restaurant chef made a pivot.

“I tried the Italian avenue but people really liked handheld foods, like tacos, burritos, nachos,” Bartow said. “I thought it was beneficial to get out on the street and meet people and try and stay with the current trend of a food truck.”

While tacos are not native to his hometown of New York, there’s something about a homecooked meal that’s undeniably comforting, Bartow said.

“There’s a lot of people that come to the University from all over the world and it’s just nice to have some homecooked food,” Bartow said.

Aside from serving up an array of tacos, Bartow said Cool Beans Taco Truck brings people together.