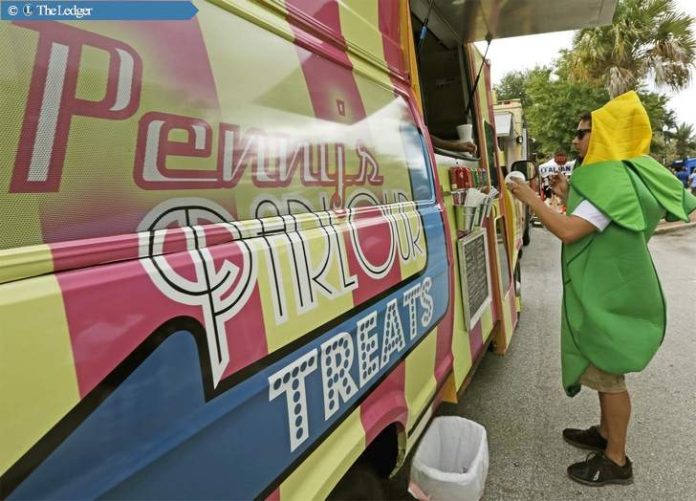 By Lance Ferguson  |  The Ledger

Although annual food truck revenue reached $1.2 billion last year, a 12.4 percent increase over the last five years, according towww.mobile-cuisine.com, the trend is not gaining traction in Polk County because of strict city codes.

Lake Wales officials are looking into that.

“Under our current codes, technically it’s illegal to operate a food truck in the city,” said City Manager Kenneth Fields.

David Shields, who owns the Sawadee Thai food truck, said he was surprised when he asked about taking his truck to Lake Wales, Auburndale and Lake Alfred.

“All the local towns don’t allow food trucks except for events,” Shields said. “I went to the Tampa Bay Food Truck Rally. They had a seminar, and Tampa and the towns around Tampa are basically wide open. You get permission from the location owner and you can park there.”

Fields said he learned about the code issue when Shields reached out to him. Fields asked Kathy Bangley, director of planning and development, to look into the matter.

Bangley said food trucks are classified as an “accessory use” and are not allowed to operate without a permanent location.

“(Food truck owners) would have to pick a primary place to be, go through a special exception use process with the planning board with the sign-on of that property owner that they could be located there, even if were just for three days a week.”

Tanya Ayers, code supervisor in Winter Haven, said food truck owners need just a permit to operate in the city. Vendors will typically get a warning if they do not have a permit, Ayers said, but fines can reach $500 if they continue.

But Ande Williamson, owner of Dandy Ande Pandy, said it’s not that simple and there are a lot of restrictions to operating her food truck in Winter Haven.

Food trucks can sell only on land zoned commercial or industrial, specifically C-3, C-4, I-1 or I-2, and truck owners must submit a list of proposed sites to the city, according to city code.

“There are very few locations in the city,” Williamson said. “I had several picked out before and I got permission from the land owners, got insurance on the location and the city said I can’t go there. It’s frustrating so I just have to go to festivals and fairs.”

Winter Haven’s city code that outlines regulations for mobile food dispensing vehicles is 4,000 words long. The section regarding sidewalk cafes is 2,000 words, and the code for nursing homes and assisted living facilities is more than 100.

“I admit it is a bit wordy in places but it does spell out exactly what you need to do and doesn’t leave a lot of ambiguity,” said Sean Byers, senior planner in Winter Haven.

But there is a catch.

“In order to have a peddler license, you have to constantly be moving around,” he said, because they aren’t able to stay parked for more than one hour.

In Auburndale, Amy Palmer, the community development director, said there is no protocol for what to do if a food truck wants to operate in the city.

But, she said, “If they’re going to be doing business in Auburndale, we’d ask them to get a business tax receipt and set up shop in a commercial district.”

“Food trucks are a relatively new idea and when you talk about zoning with food trucks, it gets a little convoluted,” Palmer said.

Lake Alfred has a similar stance as Auburndale.

Food truck regulations are most lax in Lakeland. Kevin Cook, director of communications, said a one-year permit for mobile food dispensaries costs $50 and allows the truck to operate in most areas of the city outside of downtown as long as truck owners have the property owner’s permission and are within 50 feet of an establishment with a bathroom.

There are also few Department of Health guidelines for food trucks, only provide proof of approved water and sewer service at the location where the truck operates.

Michael Musoke, owner of Off the Griddle, said food truck owners have a lot of opportunities in Lakeland — but there is a catch: the truck must have a fire suppression system.

Musoke left Lakeland for Gainesville briefly because did not have $3,000 to install a fire suppression system like Lakeland, Tampa and Orlando require. Now that his truck is equipped with one, he is coming back to Central Florida.

And in Lake Wales, city officials have taken notice of the food truck trend.

“It’s a really up and coming trend in more progressive cities like Portland and (Washington) D.C. In D.C., when we visited there, if they didn’t have food trucks, half the city would not get fed,” Lake Wales Deputy Mayor Christopher Lutton said. “I have no problem with it if we locate an area where it’s not in direct competition with our current local restaurants.”

“It would be nice to get some zoning changed so it would be a little more flexible,” Williamson said.