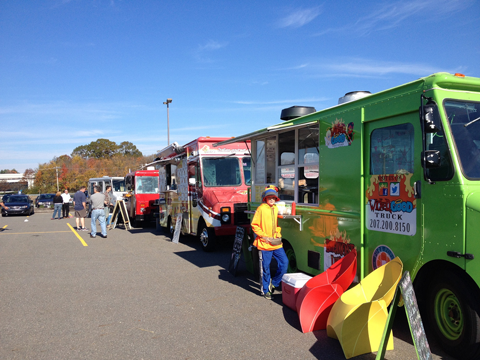 By Kate McCarty  | The Phoenix

LINE ‘EM UP Portland’s kitchens on wheels are emerging from hibernation.

In fact, only a handful of trucks manage to operate successfully on city property. Gusto’s Italian’s business is booming, serving filled flatbread cones and fried snacks to late night revelers in the Old Port. But owner Jim Chamoff says parking is difficult to find late at night (city regulations allow for the operation of food trucks in any non-residential area after 10 pm). As a result, Gusto’s employees head out to find parking at 5 or 6 pm and then have to run generators for several additional hours to power the truck’s refrigerators. Portland food trucks are coming out of hibernation, so we thought we’d check in with the existing fleet for an update on their upcoming season. First, the good news: most truck owners were very happy with their first year of service in Portland. Only one truck ran out of gas, so to speak, after a season in Back Cove Park — Portside Picnic. Owner Rich Earle cites costly permits as well as size and location restrictions as his reasons for closure.

The owners of El Corazon established themselves on Spring Street at Temple Street, serving Mexican fare to the business crowd on weekdays. Food trucks are allowed to operate on designated streets as long as they feed the meters. El Corazon owner April Garcia says it’s particularly important to maintain a consistent presence in one location: “We established this spot as this is where we are; people know we’re going to be there.”

Kevin Sandes of Urban Sugar Mobile Café (the mini-donut truck) only experienced a few months of service in Portland last fall before heading to Sugarloaf for the winter. He tried his luck on Commercial Street by the cruise ship dock, hoping to capture tourists’ business as they came off the boat. But he found the limited space allowed for food truck parking was taken up by the cruise ship vans taking passengers on daytrips. Kevin and his wife Valeri will be back this season, operating on city property during the week and in Portland Flea-for-All’s parking lot on Sundays.

Most trucks choose to rent space from a private business on the peninsula or motor out of Portland altogether. The Small Axe food truck’s chefs sold their carefully-crafted breakfast fare to Tandem Coffee’s customers in East Bayside and leased space in a parking lot next to City Hall for lunch service. This year, owners Bill Leavy and Karl Deuben easily renewed their food truck’s operational permit with the city and plan to serve lunch and dinner from the privately-owned lot. Deuben said, “Our process with [City Hall] was really smooth, in that they sent us a renewal form and we sent them money, and we want to keep it like that.”

Nate Underwood’s Wicked Good truck headed out to Peaks Island, where he served “wicked” items like chicken and waffles. With a second truck in Portland this year, Underwood hopes to emphasize the revamped “good” side of the menu, with vegan items from Modern Vegan’s Chris McClay.

Last August, the city changed its regulations to allow food trucks to cluster, like at the popular monthly Flea Bites event in the Portland Flea-for-All parking lot in Bayside. Flea Bites returns in May, and Jack Barber of  Mainely Burgers plans to participate. Barber is looking forward to “creat[ing] a destination where everyone in the family can find something they like.”

Four new trucks are launching this year: Ana’s Mobile Gourmet was recently spotted serving Mexican food and plans to launch full-time mid-May. Good Shepherd’s food truck has just started serving at special events, with all proceeds going to the Food Bank. Fishin’ Ships, with a variety of fish ‘n chips, plans to launch this summer; and Anywhere Coffee Bar from Gorham Grind is aiming to be in operation June 1.