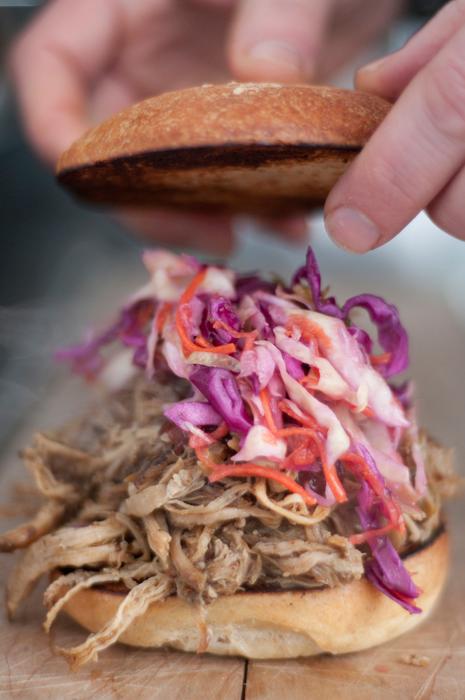 By Andrew Hitz | The Daily Emerald

Nosh Pit co-owner Corey Wisun prepares a pulled pork sandwich for a customer at his food cart near campus on Wednesday. Pulled pork is Nosh Pit’s staple product, while its other menu items change frequently.

The Nosh Pit is a testament to the drastic makeover that food carts in America are experiencing at the moment.

Owners Corey Wisun and Nicole Peltz, aside from being about the raddest people you’ll ever meet, are well-qualified to stand at the cart’s helm with culinary degrees, as evidenced in their elaborate dishes and “in-house” made ingredients.

The cart’s fare draws on all spectrums of international cuisine. Cuban sandwiches (reminiscent of Wisun’s home state of Florida), South African curries and a staple barbecue pulled pork sandwich are just some of the offerings of their weekly rotating menu.

“Nosh Pit is a global street food concept,” Wisun said, “so we pull inspiration from all around the world and do dishes you might find on the streets of various countries, and we try to stay with ethnic dishes.”

Meatballs are added to a toasted bun with cheese to complete Nosh Pit’s meatball sub, one of the rotating menu items.

The Nosh Pit’s been operational for about a year now, since they started out serving dishes at their original Eighth Avenue and Olive Street spot. Their gradual crawl toward the waves of campus students was stymied by a short stint at Kesey Square over the summer, but Wisun looks to stay at his University spot out front of Prince Lucien Campbell Hall and establish Nosh Pit as a campus staple.

The cart’s menu changes on a weekly basis with the exception of the pulled pork sandwich, and it rarely has the same offering twice, instead keeping things within a seasonal scope. Right now the fare is heartier for the winter and will gradually turn lighter during the spring and summer.

“We utilize local, seasonal, organic products as much as possible, and all of our meats are local and sustainably raised,” Wisun said.

In addition to local goodness, essentially everything that’s presented on your plate is made by Wisun and Peltz beforehand.

“All the sauces and anything that we basically put out, we make in house,” Wisun said. “We don’t cut any corners; all the meats we get we roast or smoke ourselves.”

Their Alabama-style sauce, which is a mayo-based white barbecue dip, is something Wisun said isn’t anywhere else in the food cart realm, and their sweeter, more traditional Kansas City-style sauce is just as toothsome.

Everything from Vietnamese banh mi sandwiches, French croques (an elaborate ham and cheese sandwich topped with a poached egg) and anything else that can be made with the freshest ingredients might be up on next week’s menu.

“It’s all over the map, and we always have the American thing going on with the barbecue pork sandwich,” Wisun said. “But the other two items really allow us to be creative and put our own spins on it utilizing local, Northwest ingredients.”

Wisun knows his food is edgy and that he’s on campus where students’ palates might not be as refined as his usual customer base, but that doesn’t discourage him. In fact, it does quite the opposite. Wisun wants to expose students to these different cuisines.

“I feel that we’re putting out food that’s familiar,” Wisun said. “Yet some things that are just a little bit different to kind of push the palate of people that might not have had some of the things we’re offering.”