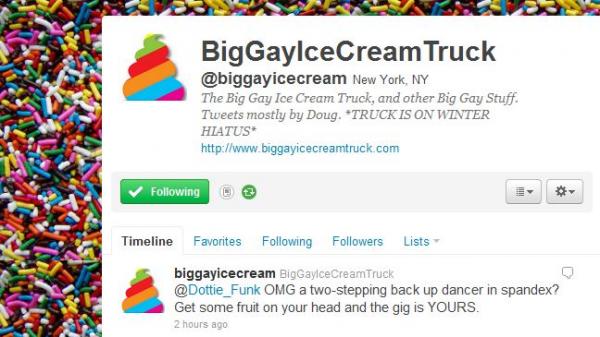 The Big Gay Ice Cream Truck, which has more than 12,000 Twitter followers, rolled into business as a summer project in 2009 and soon turned into a national sensation, appearing on NPR and the “Rachel Ray Show” and in the New York Times, Huffington Post and Men’s Health, among other outlets.

In October, owners Bryan Petroff and Doug Quint even shared their Twitter know-how at the Social Media Strategies Conference in NYC. During business hours, Quint tweets the truck’s location and menu. Although the truck is in storage until winter ends, the owners continue to engage with their followers. Here, Petroff and Quint discuss strategy, benefits and which types of tweets inspire the most replies or retweets.

BusinessNewsDaily: What crazy things have happened to you because of Twitter?

Big Gay Ice Cream Truck: This past summer, we collaborated with Humphry Slocombe Ice Cream for an event at their store in San Francisco. It ended up being on my birthday as well as the same day our theme song by Jane Wiedlin — who was able to attend the event — was released on iTunes. It was unbelievable. We initially met the Humphry Solcombe guys on Twitter, and that meeting led to this wonderfully wild night.

Another great outcome of Twitter was knowing how many people are looking out for me while I’m on the truck. I’ve mentioned being hungry or needing caffeine, and on numerous occasions within just a few minutes, I’ve had deliveries of sandwiches or soda.

BND: In 140 characters or fewer, tell me why your business succeeds on Twitter and others do not.

BGICT: Our Twitter feed combines business matters and our sense of humor. We tweet in a very specific way and stick to our mission.

BGICT: At its most basic, Twitter is the best way for people to locate us. Obviously being a mobile business, our entire enterprise is subject to traffic delays, private events, the weather and other things — so our customers always have a real-time connection on when and where to find us.

In a broader context, Twitter is our biggest marketing venue. People often ask us who does our marketing or our public relations, and the answer is no one. We have never paid a single dollar on marketing or advertising. The wonderful thing about Twitter from a marketing standpoint is the ability to bypass traditional venues and speak right to your customers.  And then on top of that, Twitter allows your followers to be extensions of your brand. They can become brand advocates and you have the possibility of reaching a much larger group of people than just your followers — still without paying for it.

It’s all about engagement. Keep in mind we are one truck at one location, but there are so many more people that are able to be a part of the experience virtually through Twitter. Through our tweets, and our followers’ retweets, we are able to promote ourselves, engage people with our menu and products, and get the word out about our brand. Without it, we never would’ve gotten such press in such a short period of time.

BND: How important is it for businesses to engage with their followers?

BGICT: There is definitely a difference between engagement, which Twitter is great for, and conversation, which doesn’t work well on Twitter.

We try to steer conversational topics over to our Facebook page, where a topic can be put into a thread and other community members can join in. This avoids the bombardment of mass-tweeting, which can have a negative impact.

I do reply a lot, but only during the truck’s off-season. When I’m at work on the truck I simply can’t read Twitter unless someone else is working with me. Thus, during the summer most of my replies come after-hours. During the off-season, I like to tweet something and then be around the computer for the next 30 minutes, as that is when the bulk of responses will come in. I like working this way — I’ll tweet, then talk to responders about the tweet for an hour or so, then move on.

BND: What kind of tweets inspire the most replies or retweets from your followers? Why?

BGICT: If we win something or achieve a milestone of some sort, our followers party with us — we get a lot of great feedback from them through replies. It is flattering and makes us really appreciate everyone who follows us. Similarly, if we are up for something and don’t win, they send us wonderfully consoling/motivating replies and this reminds us that our followers, and not accolades, are the reason we love our work.

When it comes to retweets, I’m never quite sure when something will really spread. If a tweet somehow combines food, humor and equal rights (the three biggest interests among our people), then it will probably get sent around. I don’t really strive for retweets. If they happen, I love it – but

I’m not going to try to bait a hook. If I was going to bait a line, though, nothing beats a photo of a cute kid covered in ice cream. Just saying.