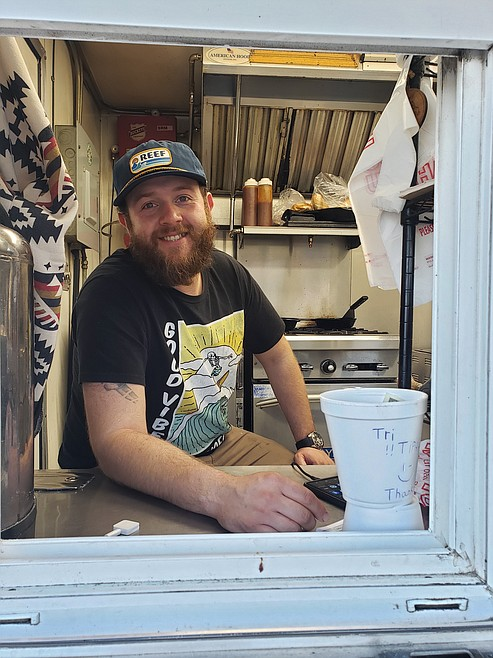 “Previously, food courts were not allowed,” said James Agidius, Rathdrum City Planner. “We now have code establishing requirements for them. We have new code for permitting requirements for mobile vendors that are at other events: private parties, open houses, block parties, etc.”

Zach Mehaffey started his food truck in 2016 on Best Avenue in Coeur d’Alene, and he watched as the city rolled out codes to meet the growing demand for food trucks and mobile vendors.

“It was the first time that they actually had codes come into place,” Mehaffey said.

Mehaffey later moved his truck, Zach’s Smoke Shack, from Best Avenue to the Prairie Avenue Food Court, and as a Rathdrum native he’s seen a lot of support from his community.

“I had a lot of customers coming from the Rathdrum area,” he said. “I definitely have the Rathdrum clientele who would support a dream or investment. I would imagine if a food court popped up there, it would be cool to get back into the hometown vibe.”

Agidius hopes the code amendments will encourage people like Mehaffey and those with similar businesses to open in the Rathdrum downtown.

“We’ve added standards for RV parking in accessory drives or in flanking side yards,” said Agidius. “They weren’t permitted there. Our previous code basically said they could be stored in a fenced back yard or the interior side yard, but not in the front yard where your driveway is. Now you can create an accessory parking and put your RV in that.”

Nearly one third of the homes in Grace Meadows community have an RV, boat or trailer in their fenced back yard. Many residents have no problem with the current method of storing their campers and boats, but there are a handful of homes in the development that already have tall garage storage for oversized vehicles connected to the front driveway.

“I don’t really have a feeling about it,” said Al Bevacqua, a homeowner there. His current method of parking his trailer in his backyard meets his homeowners association requirements, and beyond that he doesn’t have any plans to build a structure.

“I don’t know that I would build over the top of mine,” said Larry Carpenter, another Grace Meadows resident who lives on a smaller lot with different HOA rules. His trailer is parked on his lawn in the side yard by his house.

“Travel trailers are meant to be outside. In some cases, it might be better to have them inside, depending on what the trailer is, if it’s a piece of junk you know. I’ve had a travel trailer for 40 years and I’ve never had one inside.”

“All of our zoning districts that previously supported only single-family residences now allow accessory dwelling units,” said Agidius. “They still have to be permitted. You do have to have an additional off street parking spot. But then you can have an accessory unit in the garage, above an out-building, whatever.”

Adding an accessory dwelling unit will only have to go through the permitting process. It won’t have to be approved before the council in standard residential zones, provided all other zone requirements are met. The hope is to have flexible housing solutions that minimize single-family units.

These code revisions went into effect Oct. 5 and are now officially active.