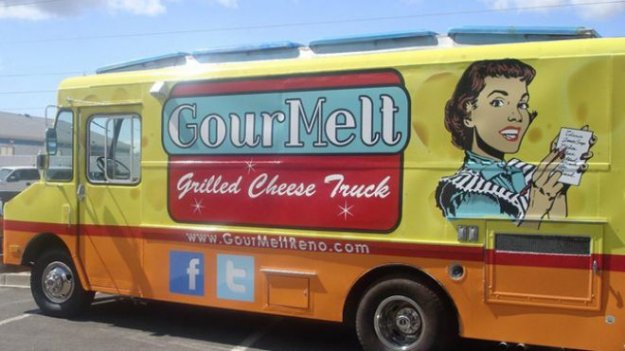 This won’t take much of your time, unlike a few of my reviews, since The Cheese Truck is less than a half-hour long. But it’s worth the half-hour you’ll spend since you’ll learn about a small gem in “the biggest little city in the world” known as Reno, Nevada. The film follows Haley and Jessie, two optimistic women who run a small business catering grilled cheese and other popular dishes from a mobile kitchen which they call “Bessie” but who we call “Gourmelt.” Over the course of a breezy half-hour, we get an in-depth and interesting look into how they run their business, a.k.a. what it’s like for anyone who makes their living running a mobile kitchen: does it pay enough? What are the necessary investments? Is it satisfying, especially during difficult economic times?

You’ll get those answers and some change in The Cheese Truck. It was really nice to follow two likeable young ladies who made a slightly-impulsive but heart-driven decision to run a mobile kitchen. They give you plenty of insight on their satisfaction and gripes with the job, such as driving and cooking in the heat, credit card scanners dying at bad times, and fryers slowing down when customers are waiting. But as the narrator, Jason, pointed out: spending time in the kitchen will only make you hungry, and there are more pros than cons in running a mobile kitchen, as it turns out.

Technically, the film is well-made and narrated. The background music helps keep you engaged, keeping the pacing smooth and the entertainment level high. The narration is determined to prove that a city famous for gambling, quick divorces and legalized prostitution right outside the city limits is really just a city full of people contributing their own little stories, and The Cheese Truckis one of the good ones about a couple of caterers who provide an increasingly-popular food service. Search Facebook and you’ll see.

There isn’t much to say without spoiling material and the film is only 26 minutes long, so to sum up, The Cheese Truck is an insightful and well-narrated short documentary about a small gem in Reno, Nevada, sharing what it’s like to run a mobile truck and the satisfaction it can give to the owners. Now I can have a conversation with the next guy that sells me a cheeseburger by my Home Depot. Sweet!