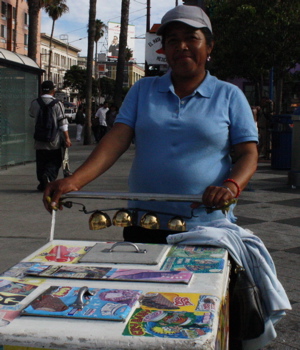 The tinkling of bells drifts through the playground at Cesar Chavez Elementary, reminding children that no afternoon ramble down the slide seems truly complete without a melon ice bar.

In Richmond, pushcart vendors like Carlos Morales depend on youthful appetites and spare quarters to earn a living, hawking ice cream, homemade chips and corn on the cob.

But come summer, the row of vendors who eke out an income behind Chavez Elementary will face new regulatory challenges that may put some out of business.

“I support my family,” Morales said. “But it is tough.”

Street vendors will see the health inspector far more frequently — perhaps monthly — under a new plan to better coordinate efforts of Contra Costa Environmental Health and Richmond code enforcement. The City Council voted this month to place a 45-day moratorium on new permits for mobile vendors, to allow time to flesh out that plan.

In 2009, his office heard 129 complaints about food-borne illness from mobile vendors, 41 of which originated in western Contra Costa. In 2010, the number rose to 176, with 63 in West County.

“In one case, I got a complaint about food being prepared in a private residence,” Lucas said. “They were preparing corn on the ground in the backyard, and they were frying what they call ‘doritos’ [deep-fried chips] in galvanized steel garbage cans, with propane burners.”

Other vendors push around a shopping cart with a plastic bag full of a mayonnaise-based sauce, rubbing it on precooked corn at the sauce at the point of sale. That worries health officials.

But Richmond intends to tread lightly, code enforcement Chief Tim Higares said. People selling street-corner fruit by the flat or truckload are a fixture of Richmond’s cityscape, as are taco trucks and the fleet of pushcarts around schoolyards.

“An effort is under way to educate the neighborhoods and the vendors about food safety and proper permitting,” Higares said. “Right now we’re passing out fliers and talking to neighborhood councils and other groups.”

In early summer, code enforcement officers plan to shift gears. Once or twice a month, code inspectors will spend the day with health inspectors, sweeping the city to ensure that street vendors carry proper permits and store their food properly.

The vendors subsist in Latino neighborhoods, where street-corner vendors are culturally ingrained. Some leaders fear the effort may squelch custom and deprive some of income.

“I see nothing wrong with it. They are making a living,” said former Richmond City Councilman John Marquez, who helped draft the existing ordinance governing city regulation of mobile food vendors in the 1980s. “It is an honest living for them, and it’s what people can afford.”

But conflict remains. Latino merchants, now a powerful voice in Richmond politics, mostly have stationary businesses, pay taxes and submit to regulation. The perception of unfair competition drives some complaints.

Stricter health-code enforcement will create economic barriers for the vendors. Licensed vendors can store and prepare food at a commissary in San Pablo, for yet another fee.

Morales works for a San Pablo company that employs 11 ice cream pushcart vendors. Every day he and others walk a circuit between schools in central Richmond, catching children and their parents on their way home.

It’s a hard living. Morales estimates he sells seven or eight boxes of ice cream daily, each bar for about $1 or $1.50. The company takes half his proceeds, and he must pay for his own gasoline and dry ice to keep his cart cold.