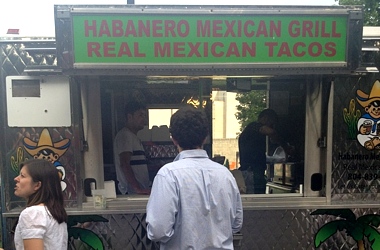 On Tuesday and Friday evenings, the Virginia Historical Society’s parking lot is packed with people. But they aren’t lining up to see the latest exhibits. They’re gathered in the parking lot with tables, blankets, and dogs, eating everything from burritos and Thai food to ice cream and cupcakes.

Since March, a dozen food trucks have gathered outside the VHS twice a week, serving dinner to residents of the surrounding areas and beyond. Food Truck Court, as it’s called, has drawn rave reviews from customers, but it has caused some controversy in the neighborhood nearby. One resident has complained that the food trucks violate a city ordinance and should be prohibited.

Food Truck Court is scheduled to last until Labor Day. But because of the complaint, it might mimic Art 180’s exhibit on Monument Avenue, which was cut short because it violated the city code regulating signs in roadway medians.

The Richmond Department of Planning and Development was contacted through email on April 24th by C. Wayne Taylor, a blogger for the City Hall Review. He asked what ordinance permits Food Truck Court. Taylor believes the trucks violate a zoning ordinance: “The property is zoned R-6 – Residential (Single Family Attached), which does not list the activity as an allowed use,” he wrote.

On May 11th, the planning department responded to Taylor’s email, but didn’t answer his question. Taylor then contacted the mayor’s office; his question remains unanswered.

Some food truck operators are not threatened by Taylor’s attempt to have them barred from the VHS. Patrick Harris, the chef and operator of Boka Truck, said the VHS seems fine with having food retailers on its private property. He believes that everyone is following the property-vendor law. Some food truck operators, however, are concerned by the prospect that they might be barred from the VHS parking lot.

Neil Stevens, the chef of Sustenance, serves food made with local products. He was unaware anyone was trying to put an end to Food Truck Court and finds this disturbing. “Food Truck Court has been essential to my success, making up about a quarter of my business,” Stevens said. “Just over a year ago, I started the Sustenance truck to improve my family’s quality of life.”

Mark Ryan, a Food Truck Court regular, said he would be upset if the vendors are forced out before Labor Day. “It’s great for a lot of folks,” Ryan said. “There’s a variety, and it’s all local. It’s ridiculous. I don’t know how it’s bothering anybody.”

As Taylor tries to put the brakes on the Food Truck Court at the VHS, the vendors have been invited to other locations. Last week, Harris and other food truck operators announced that they have permission to offer the Food Truck Court at Chesterfield Towne Center. The trucks will offer their tasty wares at that location from 6 to 9 p.m. on Wednesdays, beginning in mid-July.